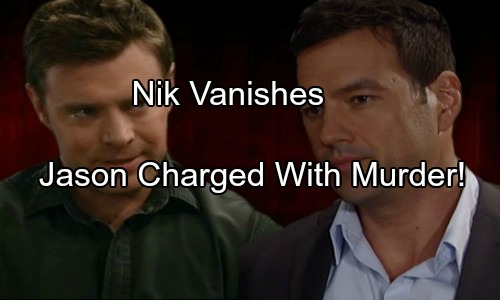 Diane Miller (Carolyn Hennesy) just informed Jason that Nikolas was suing him, accusing him of paying for the ELQ stock with profits from criminal activities. Diane knows Jason’s money is dirty but assured him that Damien Spinelli (Bradford Anderson) thoroughly laundered it.

General Hospital spoilers say the lawsuit has merit whether it can be defended or not. To make matters worse, all of ELQ’s assets have been frozen as a result of the lawsuit. This will anger Jason because it doesn’t just hurt him but hurts all of his extended Quartermaine family.

Then, GH spoilers warn us that Sam Morgan (Kelly Monaco) will find signs of a struggle, likely at the Nurses Ball. People will notice that Nikolas has gone missing – and there may be signs of violence that indicate something bad has happened. 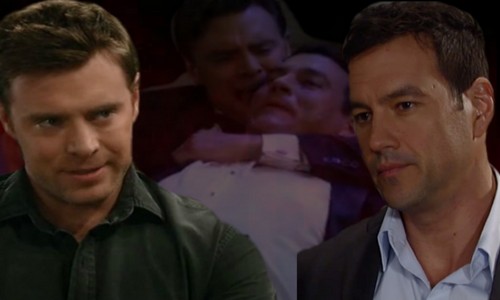 Since it’s Jason that has motive and was on hand in the location that Nikolas seems to have been harmed and gone missing, he’s the likely culprit. Jordan may jump the gun when she arrests Jason, but will feel like she has enough circumstantial evidence to make the collar.

Other GH spoilers indicate that Jason won’t be held for too long, though, because then he and Sam jump into an investigation to find out what happened to Nikolas. The big question is whether someone kidnapped Nikolas or harmed him or if this is something else entirely.

Did Nikolas himself set this scenario up to get revenge against Jason for leveraging him on the ELQ shares and assaulting him on more than one occasion? Is Helena Cassadine (Constance Towers) back from the dead and took her grandson captive?

Is there another Cassadine lurking in the shadows making trouble? Or is this Nikolas trying to take himself off the radar while he sorts out his problems?

Also, remember that Tyler Christopher is taking a break from the role of Nikolas and Nick Stabile has taken on the role in a short term recast. There’s no word on how long this actor substitution will last. The recast is to cover a gap while Tyler Christopher is in contract negotiations with ABC.

This ensures no storyline gap (like they had with Rebecca Herbst during her negotiations) since Nikolas is part of the big Hayden Barnes/Rachel Berlin (Rebecca Budig) arc that’s building momentum. Of interest is that just as Nikolas goes missing, Spencer Cassadine (Nicolas Bechtel) crops up.

Hayden will have to deal with the fallout from Nikolas’ disappearance and she and Spencer will do some bonding. Laura Spencer (Genie Francis) will reportedly soften somewhat in her negative opinion towards her daughter-in-law when she sees Hayden step up as a mom figure for Spencer.

Don’t miss all the action that will bring the Nurses Ball to an explosive conclusion. And be sure to check back with CDL often for more “General Hospital” spoilers.