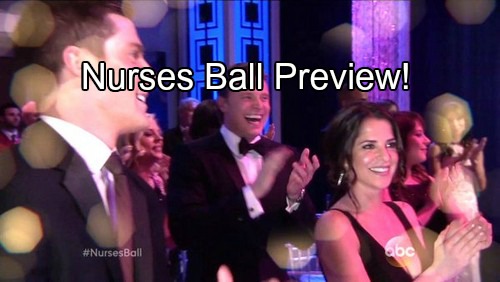 “General Hospital” (GH) spoilers for the Nurse’s Ball have been revealed and a new video promo shows big death and drama coming to Port Charles on the most magical night of the year. Here’s a look at who’s performing, who’s stripping down, and some surprise red carpet dates.

Griffin Munro (Matt Cohen) has a big night that starts with him and Maxie Jones (Kirsten Storms) on the red carpet. Looks like Nathan West (Ryan Paevey) might still be recuperating and can’t be there, but why is Maxie with Griffin – particularly if Griffin cheated with Nathan’s wife Claudette?

The really good news is that we will get a good look at the hunky new doctor because the former priest is taking it off for the Magic Milo number. Forgive us father, because he looks like sin! Alongside Griffin is the always studly Curtis Ashford (Donnell Turner) shaking his money maker.

Rounding out the sexy Magic Milo number is, of course, Milo Giambetti (Drew Cheetwood) along with Felix DuBois (Marc Samuel) and Dillon Quartermaine (Robert P Watkins). Valerie Spencer (Brytni Sarpy) is Curtis’ number one girl for the ball and they walk the red carpet together.

Jordan Ashford (Vinessa Antoine) is there with Andre Maddox (Anthony Montgomery) but the promo video showed no sign of Anna Devane (Finola Hughes). Will she be on hand or is this night too painful since Duke Lavery (Ian Buchanan) died after performing his last tango?

General Hospital spoilers say Robin Scorpio (Kimberly McCullough) is there and slated to make a speech while her daughter Emma Drake (Brooklyn R Silzer) performs again this year but this time with Ned Ashton (Wally Kurth). It looks like Emma and Ned may be doing an Elton John number since they’re in feathery outfits with wild glasses.

Lucas Jones (Ryan Carnes) is on the red carpet with Bobbie Spencer (Jacklyn Zeman) and he and fiancé Brad Cooper (Parry Shen) will share backstage champagne with her and Felix. Lucas and Brad are set to get hitched at or near the Nurse’s Ball but GH spoilers say that Lucas may also meet a violent end that night, so watch out!

Also out and about is Morgan Corinthos (Bryan Craig) who has either been released from the Freedman Clinic or got a day pass because he’s there with the other men of the family – Sonny Corinthos (Maurice Benard) and Michael Quartermaine (Chad Duell).

Wonder if Sabrina Santiago (Teresa Castillo) will be there as Mikey’s date… Jason Morgan (Billy Miller) has Sam Morgan (Kelly Monaco) on his arm and they are at the Q table and Robin sits nearby so they can chat and catchup.

Speaking of the Quartermaines, looks like Morgan and Kiki Jerome (Hayley Erin) are cooling off because she shares a sweet first kiss with Dillon at the event. Are they performing together? They’re both in cute hats and casual clothes seen backstage.

The big nurse number features Epiphany Johnson (Sonya Eddy) all done up in red scrubs while the rest of the nurses are in traditional white nurses gear so she really stands out. Looks like Brad, Felix, Bobbie, Amy and other GH staff take the stage.

Notably absent from the teaser trailer is Franco (Roger Howarth) although Liz Webber (Rebecca Herbst) is seen and we’re sure hoping they’ll be together at the big event. Alexis Davis (Nancy L Grahn) and Julian Jerome (William deVry) aren’t shown but Julian faces arrest that night.

Hayden Barnes portrayer Rebecca Budig was asked what she’s most looking forward to on the Nurse’s Ball episode and she said, “The naked men – I missed them last year!” Another GH twitter pic revealed Michelle Stafford in her ball gown, so we know Nina Clay is on hand as well.

GH spoilers tease Hayden and Nikolas Cassadine (Tyler Christopher) make a public scene soon and the ball certainly seems like a great place to make a spectacle. Also, Liz faces public humiliation – could that tie into Hayden and the Nurse’s Ball? We’ll see.

Stayed tuned to CDL for more “General Hospital” spoilers on all the May sweeps action including the 2016 Nurse’s Ball and be sure to share your comments below.