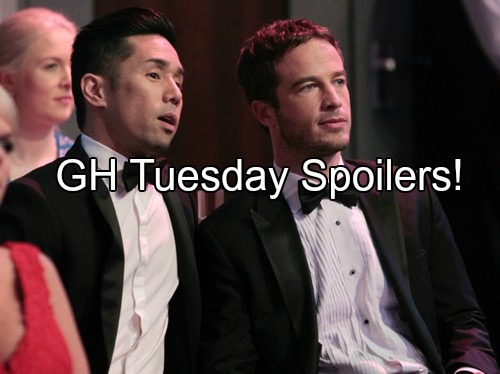 The red carpet has lots of drama, but perhaps not as much as we’d like. Remember the promised Liz Webber (Rebecca Herbst) humiliation? Turns out Liz and Hayden Barnes (Rebecca Budig) chose the same LBD to wear. Is that all it is after the big tease?

We were hoping Carly Corinthos (Laura Wright) was going to drag Liz on stage and rake her over the coals. If it’s just a fashion faux pas, and nothing more, that’s a bit of a letdown. However, other GH spoilers promise that this year’s Magic Milo dance number is NOT to be missed.

Father Griffin Munro (Matt Cohen) will be decidedly unpriestly as he sheds his clothes and shakes his booty. Sexy Curtis Ashford (Donnell Turner) is also part of the number as well as Magic Milo himself (Drew Cheetwood).

On the red carpet with Hayden is her recalcitrant hubby Nikolas Cassadine (Tyler Christopher) who just fought off the urge to kiss her and warned her to be a good wife out in public. General Hospital spoilers say it looks like Nik and Jason Morgan (Billy Miller) have a red carpet run-in that is definitely NOT about fashion.

Sam Morgan (Kelly Monaco) is also there and ready to be best person to her brother Lucas Jones (Ryan Carnes) but the groom may not make it to the altar on time because of a crisis back at GH. Lucas is called away to attend to someone and things take a turn for the worse for the handsome doc.

Backstage, Brad Cooper (Parry Shen) and best man Felix DuBois (Marc Samuel) hang and Brad tells Felix the wedding will go off without a hitch but his groom is gone – Lucas left a note for his fiancé and took off for the hospital and something bad will befall him that could keep him away from the wedding.

Robin Scorpio (Kimberly McCullough) is back this year and will make a very moving speech about HIV/AIDS and her long lost love Stone Cates. Emma Drake (Brooklyn Silzer) is back and will perform an inspired duet with Eddie Maine aka Ned Ashton (Wally Kurth).

Dr Liesl Obrecht (Kathleen Gati) plans to make trouble and Franco (Roger Howarth) seems to be dateless but we’re hoping he cozies up to Liz if he gets the chance. Michael Quartermaine (Chad Duell), Morgan Corinthos (Bryan Craig) and Sonny Corinthos (Maurice Benard) all look handsome in their suits.

Ava Jerome (Maura West) wants Kiki Jerome (Hayley Erin) to be her escort, but will Kiki play along or decide to go with Dillon Quartermaine (Robert P Watkins) instead since they are slated to do a number together? Dillon wants more than just a duet – he wants a date!

Maxie Jones (Kirsten Storms) nags Griffin into being her date for the Ball since Nathan West (Ryan Paevey) is laid up. Will his guilt over his past with Nathan encourage Griffin to do her this favor even though he said he wanted to avoid alone time with Maxie?

Lucy Coe (Lynn Herring) is in her usual pre-ball tizzy worried about last minute issues and Carly tries to talk her down. Will Carly stay seated this year or does she have an encore to last year’s horrible humiliation of Ric Lansing (Rick Hearst)?

Playing themselves as red carpet reporters at the 2016 Nurses Ball are Good Morning America’s Abbie Boudreau and KABC’s George Pennachio. Looks like a drug theft will strike GH that could turn violent and Franco has to ride to Lucas’ rescue. Will this derail the wedding?

Lots happening this week as the Nurses Ball kicks off on Tuesday, May 24, and continues through Thursday, May 26. Don’t miss any of the action, share your comments below and come back to CDL often for more “General Hospital” spoilers and news.