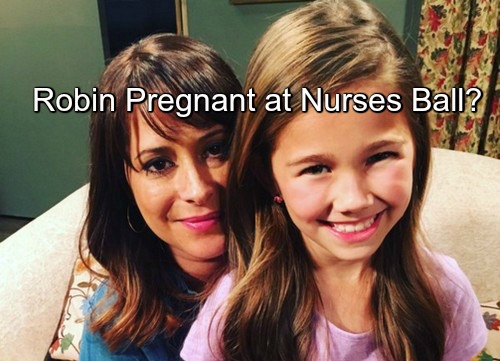 GH spoilers indicate Robin will have a big three generation moment with Anna Devane (Finola Hughes) and Emma and that’s where some big news may be revealed. You may remember Robin performed at the inaugural Nurse’s Ball back in 1994 with Stone, her BF who had HIV/AIDS.

They did a Romeo and Juliet number. You’ll recall in 1996 that Robin announced her own HIV status after Mac Scorpio (John J York) gave Robin a quilt in Stone’s memory and then Jason Morgan (then Steve Burton) carried her out when she broke down crying.

We’re wondering if Robin’s big announcement this year will be equally as dramatic and whether it will trigger more memories for Jason Morgan (Billy Miller) who will also be on hand. When McCullough hinted that Robin might return pregnant, that seemed like great news.

GH fans would love the idea of another Scrubs baby even if Jason Thompson is busy over at “The Young and The Restless” playing Billy Abbott. But that’s assuming that it is a Patrick Drake and Robin baby. Before we explore some real world implications, consider this… The missing embryo that Helena stole.

We still have to consider the long simmering spoiler that Robin was implanted by Helena Cassadine (Constance Towers) with the Stavros Cassadine-Lulu Spencer (Emme Rylan) embryo. There has been a lot of talk about Helena lately and we’ve even seen Helena back in Sam Morgan’s (Kelly Monaco) dreams.

It would be strange for Helena to have managed posthumously to implant Robin however, given Robin’s HIV status, we have to assume Patrick and Robin are using condoms and that they would go another route to get pregnant – perhaps via in-vitro.

If they did in-vitro (implanting an embryo), one of Helena’s associates could have done the deed on standing orders of the evil Cassadine witch. The only upside to a plot twist of Robin carrying a baby that belongs to Stavros-Lulu is that it might mean Robin would spend more screen time at GH.

But is there a real life pregnancy too?

But what we really hope is happening is that Kimberly McCullough herself is pregnant and the baby bump will be un-hidable by then and that’s why she may announce a Robin pregnancy. You’ll recall that McCullough shared the heartbreaking story of her miscarriage last year.

And if you check out Kimberly’s Instagram photo stream, she’s looking a little thicker around the middle and in really recent photos is sticking to above the waist shots. Is that a sign she’s pregnant once again? Let’s hope so.

It would be thrilling if Kimberly McCullough was pregnant again and shared the news with GH fans at the Nurse’s Ball. As exciting as a stolen embryo plot might be, a real-life baby for McCullough after she shared the loss of her child last year would be even better.

What do you think GH fans? Are you excited to see Kimberly McCullough at the Nurse’s Ball? Share your comments below on Robin’s big return and check back with CDL often for more “General Hospital” spoilers and news.

When the littlest think makes your day 😍💜💖🐟 pic.twitter.com/d0areoiX0k