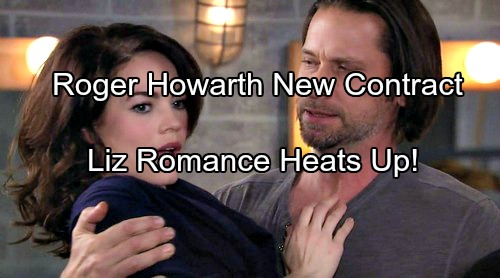 “General Hospital” (GH) spoilers reveal that Franco will be ready to heat up his new romance with Liz Webber (Rebecca Herbst) in coming weeks because portrayer Roger Howarth has just renewed his contract with the ABC soap.

This story is interesting because Soap Opera Digest ran a blind item a little over a week ago that said a “veteran actor” was being subjected to “hardball” contact negotiations. Facebook group “Soap Fans United” reported that the item was about Roger Howarth.

But then Nathan Varni posted a lengthy Facebook rebuttal on his page (see pic below) that said, among other things, “The truth is that blind item had and has absolutely nothing to do with GH or Mr. Howarth. For those who believed it, I’m truly sorry they fooled you…” 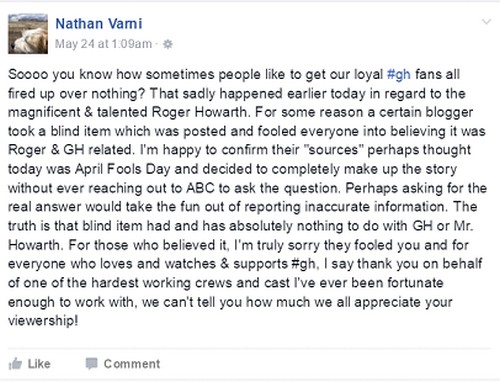 Yet based on the Roger Howarth renewal announcement, it seems like he well could have been negotiating his contract when the blind item leaked. Plus, we later found it was Tyler Christopher (Nikolas Cassadine’s portrayer) that’s in contract negotiations that are supposedly tough.

Clearly the blind item could have been about either Howarth or Christopher, so the Varni denial seems strangely aggressive considering that not one, but two, of their front line actors were in contract talks when the item leaked.

The good news is, Franco is sticking around and has lots of story to play with his budding romance with Liz, his pseudo-fatherly relationship with Jake Webber (Hudson West), and his growing animosity with reformed hit man Jason Morgan (Billy Miller).

The bad news is that GH seems to be putting veterans through the wringer during contract negotiations – remember how we almost lost Rebecca Herbst in March after the network made her a reportedly lowball offer? Yet, they have the funds to keep stocking the cast with unnecessary newbies.

No wonder the budget is tight when it comes to renewing fan favorites with legacy ties. New characters are nice, but Port Charles clearly has an immigration issue. For now, we don’t know if Tyler Christopher will get a renewal and Nick Stabile has stepped in to play Nikolas while things are hashed out.

But at least Franco is safe! What do you think GH fans? Are you happy that Roger Howarth is here to stay, at least for a while? Share your comments below and come back to CDL often for more “General Hospital” spoilers and news.