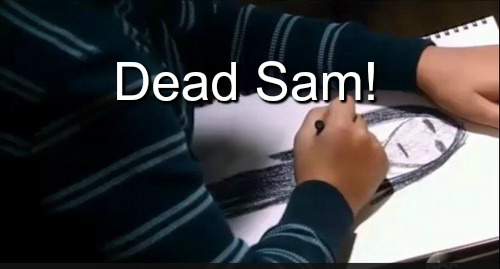 “General Hospital” (GH) spoilers hint that Sam Morgan (Kelly Monaco) will realize she was wrong about Liz Webber (Rebecca Herbst) setting up the incidents at her house to keep Jason Morgan (Billy Miller) close by. This has Sam rethinking their hostile attitudes towards one another.

Now that Jason has recovered a significant memory of his life with Sam, his wife sees that they could well be on the road to love again. Now that Sam feels like Jason is done with Liz, except for co-parenting duties, Sam feels more confident and decides to reach out to Liz.

After all, they will be in each other’s lives since they’re each raising one of Jason’s kids and those kids are brothers. However, one of those kids – Jake Spencer (James Nigbor) is turning into a problem that all three – Sam, Jason and Liz – will soon have to reckon with.

Jake overheard Liz crying to Laura Spencer (Genie Francis) about Sam’s accusations over the scary happenings at her house and how Jason believes Sam and now they are permanently alienated. She said Sam has taken Jason and was continuing to discredit her even though she already won.

You’ll recall that Jake listened in while angrily scribbling what looked to be a picture of dead Sam. It doesn’t take an art therapist to interpret that angry Crayon sketch… Jason will continue to grow closer to Sam and will make a major decision about his future that sets Jake off.

Liz will get a dire warning from Franco (Roger Howarth) soon about Jake’s blooming signs of violence. Will Liz take Franco’s words to heart? She’s skeptical about involving him in her son’s mental health sessions and could dismiss what he says. Either way, Franco’s suspicions will be confirmed soon.

Looks like Sam will come to see Liz about burying the hatchet so they can all interact peacefully with Jason and the kids. This will go tragically awry and Sam’s life may be in danger. What Jake does to Sam is still a question – because we have no idea just how disturbed he is.

Helena Cassadine (Constance Towers) could have schooled Jake in all manner of dangerous skills. He could be a budding arsonist, an ace with a gun, an aspiring poisoner, who knows? But GH spoilers indicate that Sam’s life could be at risk by week’s end.

GH spoilers further reveal that Jason and Liz will be shocked at what they discover about their son. Is little Jake headed for the pediatric wing of Shadybrook Sanitarium? How far will Jake go with Sam and can he be salvaged? Or did Helena do him permanent damage that can’t be reversed?

Stay tuned to ABC for weekday GH episodes and check back with CDL all week long for detailed daily “General Hospital” spoilers, week ahead spoilers and more.