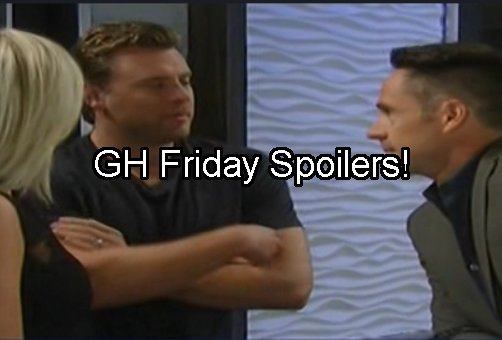 New General Hospital (GH) spoilers for the Friday, October 7 episode reveal that TJ is back and tries to stop Morgan, Sonny cracks under pressure from Griffin, Kiki makes a critical choice, and Alexis’ boozing takes a toll. Here’s what to expect on the cliffhanger Friday GH episode.

First, Morgan Corinthos (Bryan Craig) tossed out his mental meds and then downs a bunch of booze. Then he works himself up and is ready to go make trouble for someone. TJ Ashford (Tequan Richmond) shows up in time to try and stop Morgan from getting into his car. 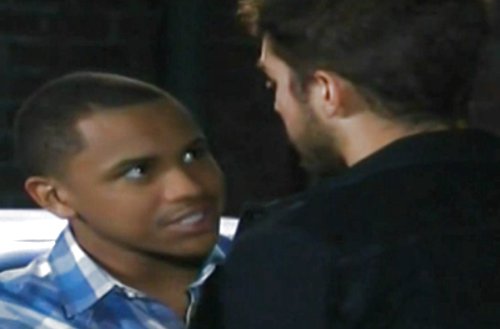 TJ confronts a drunk and enraged Morgan but Morgan is intent on making someone pay for his pain. Will it be Julian Jerome (William deVry) or Dillon Quartermaine (Robert Watkins)? We’ll see. GH spoilers say tragedy and violence will soon hit the Corinthos clan.

Dillon gets welcome news when he’s at a low point. After that shared kiss, Kiki Jerome (Hayley Erin) admits to Dillon that she never got over him. They talk and Kiki decides she wants to be with Dillon but has to break things off with Morgan first. They have no clue Morgan is reeling. 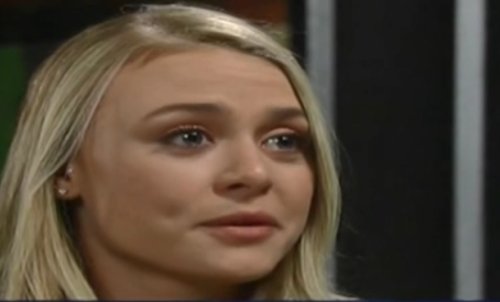 Scotty Baldwin (Kin Shriner) warns Ava Jerome (Maura West) to stay away from someone. Could be Paul Hornsby (Richard Burgi) that he’s talking about since Ava wants that recording of her confession back. It could also be about Morgan since Scotty knows about that scheme too.

Over at Casa Davis, Sam Morgan (Kelly Monaco) and Molly Lansing (Haley Pullos) confront Alexis Davis (Nancy Grahn) when they find her boozed up again after her unwelcome visits from Julian and Anna Devane (Finola Hughes). GH spoilers indicate Alexis will collapse due to her binge drinking. 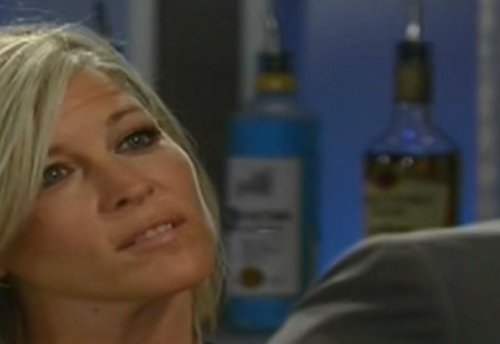 At the MetroCourt, Julian was getting into an elevator with what looks like the hit man Sonny Corinthos (Maurice Benard) hired to make sure Julian was killed in an “accident.” Events happen that result in the hit not going through and Julian winds up back at the bar.

Julian bickers with Carly Corinthos (Laura Wright) and Jason Morgan (Billy Miller) steps in between them and makes threats that should scare some sense into Julian. Seems like the Jerome mobster isn’t welcome anywhere in Port Charles anymore…

Back at the chapel, Griffin Munro (Matt Cohen) continues to lay into Sonny about his murderous mob lifestyle. Griffin told Sonny he has no real faith in God and that’s why he kills but also makes it clear that he sees Sonny as a murderer and nothing more – there’s nothing divine in his actions.

Griffin tells Sonny he needs to make things right and wants him to turn the other cheek. Sonny breaks down then General Hospital spoilers indicate he calls off the hit on Julian. Carly will be greatly relieved that Griffin got through to him but then everything falls apart in coming days.

Sonny stumbles into a place to free his soul….@MauriceBenard @GeneralHospital #GH

What do you think GH fans? Share your comments below on these GH spoilers for the cliffhanger show on Friday, October 7. Be sure to check back often with CDL for the latest General Hospital spoilers, news and more.