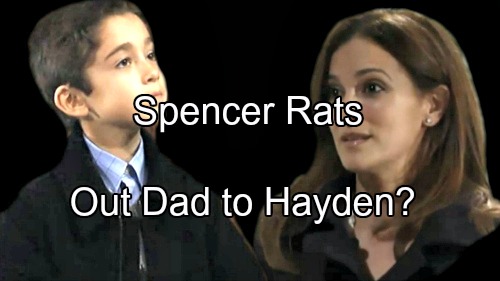 “General Hospital” (GH) spoilers reveal that Spencer Cassadine (Nicolas Bechtel) definitely knows that his dad Nikolas Cassadine (Tyler Christopher) is alive and well but will the kid slip up and spill the beans to Hayden Barnes (Rebecca Budig)?

Spencer is a clever kid, no doubt, and has a little bit of the Cassadine darkness in him too – remember his Phantom of the Opera gig at last year’s Nurses Ball when he almost dropped a sandbag on the head of his love rival?

Spencer can appreciate his dad’s faked death scheme, but can Spencer tough it out and keep playing it cool? Already people have noticed that he doesn’t seem to be grieving like he should – and General Hospital spoilers say Spencer may reveal more in coming days.

Naturally, Nikolas involved Spencer in the plan from the get-go because he didn’t want his son to be crushed and think he’s an orphan, but that’s a BIG secret for a little kid to keep, even one as smart and devious as Spencer.

Jason Morgan (Billy Miller) has already decided that Nikolas faked it and Spencer knows the truth. General Hospital spoilers ask will Hayden be the next to figure out her hubby is not dead but trying to escape their marriage with this vile scheme?

The thing is, Spencer desperately wants a mom in his life. He lost Courtney and there have been a string of bad girlfriend choices by his dad in recent years – chief among them Britt Westbourne (Kelly Thiebaud) that Spencer adored.

Spencer also loves Hayden – and she clearly cares about the kid. When she talks to Spencer about her grief over losing Nikolas, because she truly is sad, will he crack and give her a big hint that his dad Nikolas is not dead?

“General Hospital” spoilers tease that Hayden may get an inkling from Spencer that Nikolas didn’t die and then will get a message from “Nikolas” that has her running off to Cassadine Island. But that message may or may not be sent from her hubby.

It could be a message leading her into a trap. GH spoilers also tease that Spencer will soon prepare to leave to go be with his dad, but how will that work? It’s one thing for Nikolas to fake his death and skip town, but how will Spencer leave Port Charles?

The bottom line is that this faked death plot seems pretty sketchy and not well thought out – and it may turn on Nikolas and he could face real danger. Will Spencer come clean to Hayden because he doesn’t want to lose her?

Will Spencer be the one who sends the fake message from Nikolas in an attempt to reunite Hayden and his dad so they can be a happy family away from Port Charles? Spencer is as big a schemer as his dad so it’s possible.

If Spencer wants to keep Hayden in his life as his mom and thinks she’s the one his dad should be with, the kid would go to any lengths to make it happen. What do you think GH fans? Will Spencer blow Nik’s fake death plan wide open?

Is Spencer so desperate for a mom that he might betray his father – but with the best of intentions? Share your comments below and check back with CDL often for more “General Hospital” spoilers, news and updates.