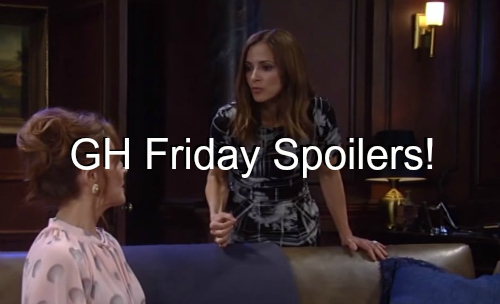 “General Hospital” (GH) spoilers for Friday’s episode, June 10, reveal cliffhanger action. Lucas and Brad try to get married, Ava and Julian worry about the Carlos investigation, Carly goes full-hypocrite on Alexis, and Maxie and Griffin have a revealing discussion.

Alexis Davis (Nancy Grahn) has to deal with the last-minute General Hospital wedding that Julian Jerome (William deVry) sprung on her and it’s the last thing she needs with all this stress. GH spoilers say Ava Jerome (Maura West) shows up and warns her brother about the PCPD.

Ava says they’re looking at Julian for the Carlos Rivera (Jeffrey Parise) murder. Did Alexis reveal to the cops that she has the murder weapon? Funny thing is, it will likely have Carlos blood trace on it, but Alexis’ fingerprints.

Did Ava overhear something at the cop shop or from Paul Hornsby (Richard Burgi)? General Hospital spoilers tease that Ava will leave town because Julian wants her out of the way until the heat dies down.

Alexis isn’t happy to see Carly Corinthos (Laura Wright) but she’s there for the wedding. Before the festivities kick off, Carly plays hardball with Alexis and tells her to quit covering for Julian.

But isn’t that what Carly does every day for Sonny Corinthos (Maurice Benard)? Is Alexis in any mental shape to fight against Carly’s hypocrisy? Will all of this pressure be too much for Alexis?

Will Alexis call in a tip that the murder weapon is at their house? GH spoilers also indicate that Brad Cooper (Parry Shen) and Lucas Jones (Ryan Carnes) may see wedding attempt number two thwarted.

Do the cops show up with a warrant and cut short the festivities? Spoilers indicate there will be an interruption. Can these two guys ever get to the “I do” before things go bad? Will Julian be arrested or will the cops just come with a search warrant?

Sam Morgan (Kelly Monaco) and Jason Morgan (Billy Miller) discuss what he discovered at Wyndemere. Did Jason find something in the room? Or is Jason more intrigued by Spencer Cassadine’s (Nicolas Bechtel) strange conversation?

Spencer’s present to Emma seemed like a parting gift and the kid seems convinced his dad is NEVER coming back and is in a “better place” but didn’t acknowledge death. Does Jason suspect that Spencer knows his dad faked his death?

Naomi Dreyfus (Robin Riker) will volunteer to help Hayden Barnes (Rebecca Budig) deal with the FBI when Hayden freaks out and tells her mom she thinks they’re going to arrest her.

Also, will Hayden ask why her mom seems so focused on Liz Webber (Rebecca Herbst)? There’s definitely more story coming with Naomi and Liz… What will it cost Hayden to get her mom’s help with the FBI and the diamond mess?

Damian Spinelli (Bradford Anderson) uncovers some important info, but is it to help Jason? Or is it about Nathan West (Ryan Paevey)? Nathan asks Spinelli how much Maxie Jones (Kirsten Storms) told him about their argument.

Spinelli seems to be fishing for more and tells Nathan she told him “everything” when he clearly knows there’s more he doesn’t know. Will Nathan slip and confess to the shooting and shock Spinelli?

Is the info Spinelli finds about Claudette (Bree Williamson) since he was checking on her when Nathan interrupted? GH spoilers hint that Claudette will call Nathan soon and will be in town in a few weeks!

Maxie wanted to confess the shooting to Griffin Munro (Matt Cohen) but he doesn’t want to hear anything from the GF of the guy who shot him. However, it looks like Maxie might be the one hearing Griffin’s confession.

Griffin tells Maxie about a mistake he made. If he tells her he was shagging a married woman whose drunk cop hubby shot him, seems like Maxie could figure things out. How much will Griffin tell Maxie?

The wedding interruption is likely the big cliffhanger moment for tomorrow’s General Hospital episode, Friday, June 10, since spoilers indicate the Cassadine dagger will be at the PCPD next week.

Share your comments below and check back with CDL every day for more “General Hospital” spoilers and news.