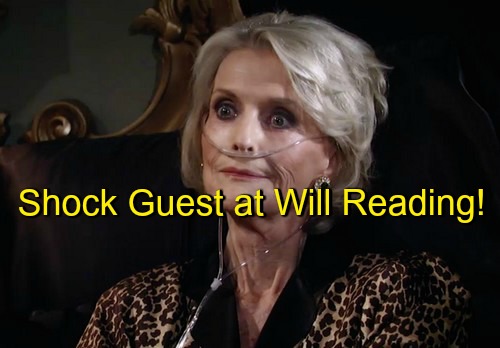 “General Hospital” (GH) spoilers reveal that Helena Cassadine’s (Constance Towers) will reading should come with many shocks and surprises – much like Helena’s long and wicked life. We know there are stunners to come but among them may be a surprise guest to the proceedings.

So far we know that Laura Spencer (Genie Francis) has a golden ticket to attend the event and surely Scotty Baldwin (Kin Shriner) will be on hand since he was the one who brought the notice to Laura. Naturally, Nikolas Cassadine (Tyler Christopher) will be front and center as well.

And we can certainly count on Hayden Barnes (Rebecca Budig) to be there since she won’t miss the opportunity to keep tabs on her new hubby and her mother-in-law. Wonder if we’ll see Spencer Cassadine (Nicolas Bechtel)? He’s been busy, but fingers crossed…

Sam Morgan (Kelly Monaco) is a Cassadine as well, but she’s going to have her hands full of Jason Morgan (Billy Miller) trying to get some loving. Alexis Davis (Nancy Lee Grahn) is also a Cassadine, so she may show up – or she may be too busy getting ready to wed her reformed mobster.
So who is the mystery guest?

Well, for starters, we have to wonder if it might be Helena herself. She sure died under very calm and suspicious circumstances, right before she could say anything that would implicate Nikolas in the Jake Doe secret. Is the old witch really dead? Would be great to see her back.

We’ve also been hoping to see Valentine Cassadine – the vilest of all the family – and rumored daddy to Nathan West (Ryan Paevey) so that would be another surprising possibility. Cesar Faison (Anders Hove) is another possible since he’s got ties to the Cassadines.

Another one to consider is Luke Spencer (Anthony Geary). Luke and Helena have a long and twisty love-hate history and he may stand to inherit something. GH showrunners have said that Luke will definitely not be coming back soon – so that means he very well could be, since they like to fib to us.

But the best outcome would be if Michael Easton shows up as his new character. He could be a Cassadine adjacent bad guy or he could be the ex-husband of Hayden/Rachel there to cause trouble. Heck, he could even be Valentine Cassadine.

We don’t know yet who Easton will be portraying, but bringing him in to disrupt the will reading would be absolutely amazing. GH spoilers indicate that the will reading should spill over onto Monday’s show, so it would be thrilling to have Easton show up in the final moments of Friday’s show.

What do you think GH fans? Who do you think shows up to the reading of Helena’s last will and testament and surprise those in attendance? Who are you hoping for? Share your comments below and come back to CDL often for more “General Hospital” spoilers and news.