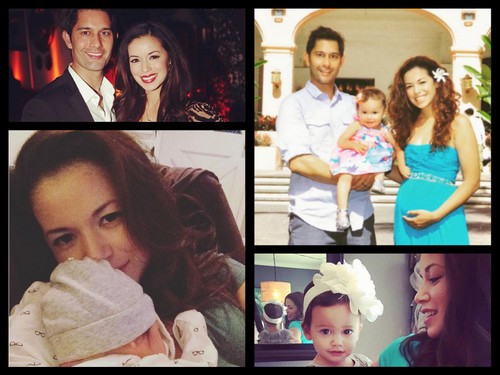 General Hospital (GH) Spoilers announce that Teresa Castillo (Sabrina Santiago) posted on social media last night a picture of her holding her newborn baby boy. This birth is Teresa and hubby Shane Aaron’s second child – the couple welcomed their daughter Victoria in May of 2014.

Fans were thrilled when Teresa announced last July on social media in a picture with hubby and little Victoria that “somebody’s getting a little brother.”

General Hospital has written Teresa’s pregnancies into her storylines but so far on the show Sabrina does not have any children. Her first pregnacy with baby Gabriel was with Patrick Drake (Jason Thompson) the baby was born early and died – fans have never gotten over that horrible tragedy.

TPTB at GH have written her character on the run with deadly Carlos Rivera (Jeffrey Vincent Parise) but it seems she is getting homesick – will Sabrina be coming back to Port Charles with a newborn?

The answer is most likely yes the fans will riot if GH does not give Sabrina her baby she so much deserves. Sabrina and the fans have been through enough and most feel she deserves to be happy at least for a while – for how long who knows since we all know what “happy” does to characters on Soaps.

We are sure GH has lots of drama in store for Sabrina considering the baby daddy is mobster Carlos Rivera! Congratulations to Teresa Castillo and Shane Aaron. CDL sends warm wishes to the Castillo/Aaron family on their new bundle of joy!! Check back with CDL often for more “General Hospital” spoilers and news and all the details on Teresa Castillo and Sabrina Santiago!