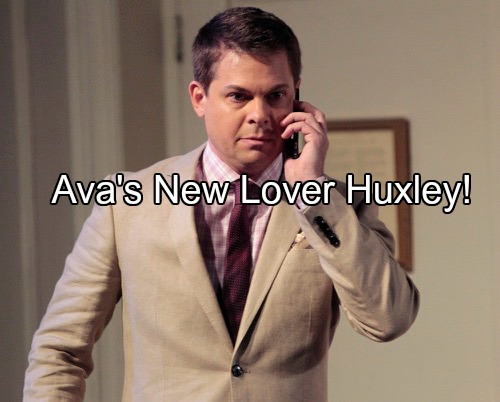 “General Hospital” (GH) spoilers tease that a new guy is coming to Port Charles in a couple of weeks and will get face time with Ava Jerome (Maura West). New guy Huxley (Trent Dawson) is a handsome and wealthy Brit that we will meet soon who comes on the scene with an agenda.

The Ava and Huxley pairing makes sense because they worked together on “As The World Turns.” Maura spent 15 years, off and on, in the role of Carly Snyder on ATWT and Dawson portrayed Henry Coleman on the soap. The pair were co-business owners for a while, but their pairing on GH may have more heat!

Trent Dawson will make his first appearance as Huxley on the Monday, June 13, episode and this ties into several spoilers brewing for Ava. Although Sonny Corinthos (Maurice Benard) and Ava have reached a custody decision, GH spoilers indicates that Ava makes another decision about Avery.

The spoiler goes on to say that this decision occurs in conjunction with Ava leaving to go on an adventure with some “unlikely” people and that’s where she may encounter Huxley. Other General Hospital spoilers for summer tease that Ava is open to love now that the custody and her criminal issues are settled.

The spoilers reveal there is a man in her future – could that man be Huxley? Paul Hornsby (Richard Burgi) has transferred his obsessive attention to Anna Devane (Finola Hughes) – and Scott Baldwin (Kin Shriner) is not slated to be around as far as spoilers have revealed, so Huxley seems like a strong choice.

Huxley is slated to be on the character canvas for a month recurring – and possibly more – which is plenty of time for Ava to get her hooks into him since she’s not known for taking things slowly. No matter who Huxley is or how this plays out, it has to be better than Ava’s past romances.

Hooking up with her daughter’s boyfriend Morgan Corinthos (Bryan Craig) and then having crypt sex with his dad Sonny was singularly awful. Plus, Ava’s creepy sex tape with the dirty DA was also icky. So really, nearly anything would be an improvement in Ava’s love life.

Huxley has to be preferable to any of that, so we’re excited to see this new guy cross paths with Ava! What do you think GH fans? Do you hope this is a new love match for Ava? Or does she need to avoid men since she has spectacularly bad taste?