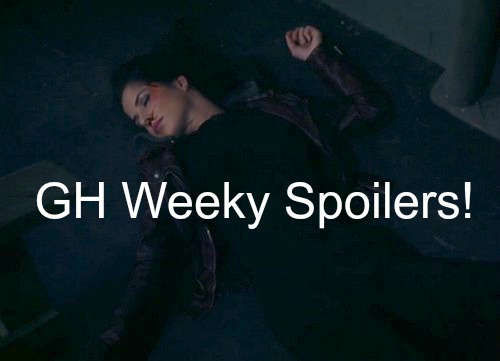 “General Hospital” spoilers for Monday February 1 through Friday February 5 reveal Sam in danger, Hayden trying to pull a fast one on Nikolas, Sonny’s new doc arrives, and Kristina’s problem is way crazier than we thought. Check out what’s coming next week.

Nina Clay (Michelle Stafford) is way excited about “boobgate” and wants to cover it in Crimson which has Julian Jerome (William deVry) and Olivia Falconeri (Lisa LoCicero) questioning her plan. Julian will let her do it, though, since he’d love it if she bankrupted his magazine.

Kristina Corinthos (Lexi Ainsworth) has a much more interesting story than we assumed – looks like the prof she propositioned was a lady. Is Kristina a lesbian? Kristina cringed when Alexis Davis (Nancy Lee Grahn) mentioned that one day she’ll “find a wonderful young man.”

Are GH showrunners about to break new ground? Wait and see. We’ll know more when Kristina spills her guts to Molly Lansing (Haley Pullos) after a confrontation with Professor Parker. Another hot plot is Morgan Corinthos’ (Bryan Craig) bipolar which is not tied up neatly in a bow.

Morgan just talked Kiki Jerome (Hayley Erin) into a date but when he has issues with his meds, he skips or tampers with a dose and he spins out. GH spoilers indicate their date could be over almost as soon as it starts thanks to his troubling actions.

Sonny Corinthos (Maurice Benard) meets his new doctor this week. Dr Griffin Munro (Matt Cohen) is pals with Lucas Jones (Ryan Carnes) but also has another tie to Port Charles. Looks like Sonny and the new guy will work well together, but who does Griffin know besides Lucas? Hmm…

Dante Falconeri (Dominic Zamprogna) and Lulu Spencer (Emme Rylan) decide to hold off on the divorce. He’s considering giving her another chance. Lulu is optimistic since he didn’t sign the divorce docs and him and Valerie Spencer (Brytni Sarpi) broke it off weeks ago.

But will Dante have second thoughts about choosing Lulu when he finds himself unexpectedly jealous when he sees Curtis (Donnell Turner) and Valerie getting close? Felix DuBois (Marc Samuel) delivers devastating news to Michael Quartermaine (Chad Duell) about Sabrina Santiago (Teresa Castillo).

Paul Hornsby (Richard Burgi) makes threats to a disgruntled Ava Jerome (Maura West). She doesn’t like his bossy ways and the risks she’s taking. Later in the week, Ava has to consult a lawyer – is this about her custody case? The evidence Paul has on her? What is it?

Anna Devane (Finola Hughes) and Robert Scorpio (Tristan Rogers) need help up in Canada thanks to Paul sending some local cops after them. Mac Scorpio (John J York) will have to ride to the rescue with an assists from Felicia Scorpio (Kristina Wagner).

Nikolas Cassadine (Tyler Christopher) has questions for Hayden Barnes (Rebecca Budig) who is trying to rush their wedding so she can be done with Tracy Quartermaine (Jane Elliot). But Nikolas is suspicious. Can she get him to ‘I do’ before he finds out her secrets? They are interrupted in a crucial moment.

Scotty Baldwin (Kin Shriner) has some news for Laura Spencer (Genie Francis). She’s got a big adventure and storyline kicking off soon. Does this have something to do with the reading of Helena Cassadine’s (Constance Towers) will? That takes place later in the week.

The big saga of the week, though, is Sam Morgan (Kelly Monaco) and her fight for life. Jake Spencer (James Nigbor) didn’t know Sam would get hurt when she followed him to the basement and now he’s terrified that he’s killed her.

Jason Morgan (Billy Miller) and Liz Webber (Rebecca Herbst) come home determined to get Jake the help he needs but then find the broken window and blood. Jake will leave Sam in the basement and not tell his parents what happened.

Sam will try to get herself out of her predicament, but instead she’ll make things worse by setting off some sort of gas leak that makes her plight deadlier. By week’s end, Sam will be in the hospital fighting for her life. The inhaled gas makes her hallucinate some memories with Jason.

Someone in Port Charles will confess to murder this week – is it Jake? Does he think he killed Sam and comes clean to his frightened parents? Or is it Ava to her new lawyer? Don’t miss a moment of the shows for the week of February 1 through February 5.

And be sure to check back with CDL every day for detailed daily “General Hospital” spoilers plus news, updates and more.