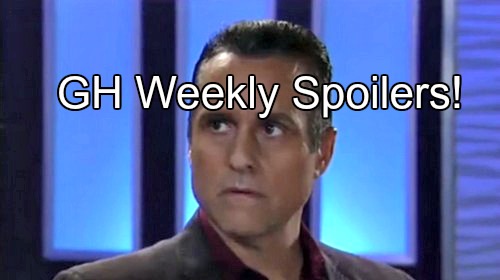 “General Hospital” (GH) spoilers tease that next week’s episodes of Monday, May 16, through Friday, May 20 will see Jason and Sam closer than ever before while Alexis and Julian contemplate the end of their marriage. GH spoilers predict trouble for Finn, the return of Sabrina and Lucy, and Liz dealing with Jake and Franco issues. Here’s what you’ll see on next week’s General Hospital.

Alexis Davis (Nancy L Grahn) can’t lie to herself anymore about Julian Jerome (William deVry) and knows that he’s been doing bad things behind her back and has returned to the mob and his murderous ways. Alexis is furious at Julian but also mad at herself. Is this the end of Julexis?

Jason is busy renewing his love with Sam Morgan (Kelly Monaco) now that his memory is back but that’s not the only relationship he’s working on this week. Jason has a moment with Monica Quartermaine (Leslie Charleson) this week and bonds with Sonny Corinthos (Maurice Benard).

At GH, Monica makes lays down the law with Dr Obrecht (Kathleen Gati) after Hamilton Finn (Michael Easton) tells the GH Chief that Dr O is making his life miserable. Monica’s slapdown won’t work and Obrecht keeps snooping, determined to out Finn’s secret and bring him down.

Kevin Collins (Jon Lindström) has a proposal for Laura Spencer (Genie Francis) as they continue to work together to decode the message Helena Cassadine (Constance Towers) left for her. GH spoilers tease it will lead her back to Lucky Spencer (Jonathan Jackson) and her past.

With Nashville canceled, GH fans are hoping to see Jackson back as Lucky in the future. Fingers crossed! Laura and Kevin’s investigation progresses and then Lucy Coe (Lynn Herring) returns and gets the wrong idea about Kevin but then she gets busy organizing the 2016 Nurse’s Ball.

Brad Cooper (Parry Shen) and Lucas Jones (Ryan Carnes) set a wedding date tied to the Nurse’s Ball as we gear up for the event. Tracy Quartermaine (Jane Elliot) gets a delivery that surprises her and Ned Ashton (Wally Kurth) is not sure his mom has changed when her actions shock him.

Hayden Barnes (Rebecca Budig) turns to Tracy when things in her life go haywire. Hayden is hit with some harsh truths when Nikolas Cassadine (Tyler Christopher) takes extreme action to make her life miserable and drive her away. Hayden reaches a conclusion that scares her.

Hayden and Liz will do battle because Liz is definitely on #TeamNik and not #TeamHayden but can Hayden take down Liz? Diane Miller (Carolyn Hennesy) gives Nikolas some very bad news. Was Nikolas trying to get the $5 million prenuptial agreement clause invalidated?

Will Curtis Ashford (Donnell Turner) help Hayden find the diamonds and sell off some Cassadine heirlooms for profit? How bad will things get at Wyndemere before Hayden or Nikolas gives up or gives in? Looks like this will be a long messy war.

Dillon Quartermaine (Robert P Watkins) was being a friend to Kiki but could become more once Morgan puts on the brakes with her. Ava makes a move to get Avery back as well but Carly Corinthos (Laura Wright) is determined to keep Avery away from her bio-mom.

Carly is also concerned about Michael Quartermaine (Chad Duell) who is ready to go to extremes to get Sabrina Santiago (Teresa Castillo) back. Mikey gets a message and then he and Sonny are ready to go find Sabrina but Carly worries about the trip father and son are planning.

Sabrina is back with Michael by the end of the week but will he have to be the one to break the news to her that Carlos Rivera (Jeffrey V Parise) is dead? How will Sabrina react to learning that her son’s father is gone? Looks like Michael and Sabrina still have some obstacles to overcome.

All this and more on next week’s episodes of Monday, May 16, to Friday, May 20 – watch every day as May sweeps heats up and come back to CDL often for more “General Hospital” spoilers and news.