General Hospital (GH) Spoilers: Week of May 2 – Liz Back, Makes Trouble For Jason With Franco – Who’s Stalking Sam and Jason? 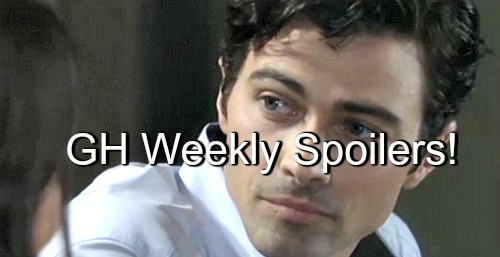 “General Hospital” (GH) spoilers reveal that on next week’s episodes of Monday, May 2, to Friday, May 6, Hale the witness meets a bad end and Sonny takes matters into his hands. Plus Alexis figures out she’s been betrayed and Anna comes at Julian over him having Duke killed.

Here’s to expect next week on GH.

General Hospital spoilers say Jason Morgan (Billy Miller) and Sam Morgan (Kelly Monaco) suspect Franco (Roger Howarth) of stalking them at the stables but he denies it. They see his drawing of Nina Clay (Michelle Stafford) and are certain he’s back to his old deadly ways.

When Carlos is interrupted talking to Michael Quartermaine (Chad Duell) before he can finish making a jail break plan, he’s annoyed and Carlos later threatens Paul Hornsby (Richard Burgi) because he’s got info on the dirty DA.

GH spoilers tell us that it’s the anniversary of Duke’s death and Anna Devane (Finola Hughes) spends time with Griffin Munro (Matt Cohen) at The Rib. Jordan Ashford (Vinessa Antoine) remains jealous of Anna’s bond with Andre Maddox (Anthony Montgomery) even after she consummates her relationship with the shrink.

Will Sam believe him when Julian says he did NOT have Sonny Corinthos (Maurice Benard) shot? Nina talks about her failed relationship with Franco to Julian who is sympathetic. Franco and Nina talk later about what they want next in life.

Franco gifts her the strange drawing which both upsets Nina while she admires it. She’s also worried he’s back to his old tricks. Franco turns to Liz Webber (Rebecca Herbst) to discuss his Nina split and she’s sympathetic to him.

Jason hates that Liz won’t dump Franco as a friend or a Jake Spencer’s (Hudson West) art therapist and gets bossy with Liz which makes her dig in her heels. GH gets a new nurse this week as Risa Dorken debuts as Amy, a gossipy nurse reminiscent of nurse Amy Vinings from the 80s.

Sonny takes action when things don’t go the way he wants. Alexis starts to figure out what Julian and Sonny are up to and wonders how she can protect her happy life. Anna also confronts both Alexis and Julian about Alexis representing Carlos and Duke’s death.

Nikolas Cassadine (Tyler Christopher) decides to play dirty with Hayden Barnes (Rebecca Budig). Is Nik the one who told the FBI where to find her? Hayden is released from the FBI after questioning and finds a smug Nikolas waiting. They bicker but Hayden isn’t ready to leave him just yet.

Despite Hamilton Finn’s (Michael Easton) advice, Carly Corinthos (Laura Wright) wants answers about the kidney that Josslyn Jacks (Eden McCoy) got but they find Dr Obrecht (Kathleen Gati) is an obstacle. Carly sneaks onto Dr O’s computer and finds out who was working that day.

Also, General Hospital spoilers ask is Finn the one taking drugs from the 10th floor pharmacy? Dr O hates Finn and he may come under scrutiny if she accuses him of raiding the drug closet. Finn gets a new patient and info on another. Is Josslyn sick?

Alexis finds information she needs but it may not give her peace of mind while Julian gets himself an alibi for a crime. Anna can’t take the pressure of thinking Julian will escape justice and is at the breaking point. Is it Griffin that keeps her in check – or Andre?

Alexis is upset by Julian’s actions and wants the whole truth. Will he give it to her? Carly begs Sonny not to act out in violence and by the end of the week, there is trouble over at the PCPD. Will Carlos be able to make a jail break like he wants?

Be sure to watch next week’s episodes the week of Monday as GH May Sweeps launche and the action heats up. Check back with CDL every day for detailed daily “General Hospital” spoilers and news.