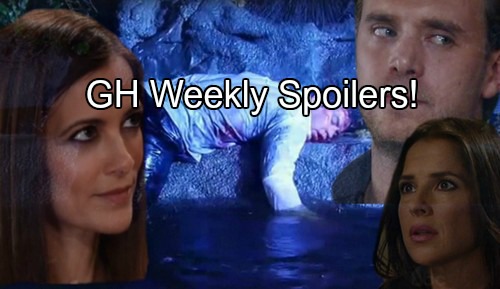 “General Hospital” (GH) spoilers tease that on next week’s episodes two new couples heat up despite angst by their exes in the week of Monday, May 30, through Friday, June 3. General Hospital spoilers tell us that a mystery deepens, another death may strike Port Charles, Alexis delays a decision and an old and new face come to town.

No Monday episode of GH, May 30 – it’s a rerun because of Memorial Day. But tune in on Tuesday for hot new action in Port Chuck – here’s what’s coming next week.

Jordan Ashford (Vinessa Antoine) shows up at Wyndemere and the evidence in the crime is damning – it sure looks like Jason Morgan (Billy Miller) offed Nikolas Cassadine (Tyler Christopher). Hayden Barnes (Rebecca Budig) wants Jordan to arrest Jason but then the tables turn.

After Liz Webber (Rebecca Herbst) brings Spencer Cassadine (Nicolas Bechtel) home from a sleepover, the family has to break the news that his father is dead. Spencer seems strangely unaffected and when Hayden comforts her stepson, Laura Spencer (Genie Francis) takes note of their bond.

General Hospital spoilers say Jason isn’t arrested but Jordan says he’s a “person of interest” and to stay in town. A surveillance video and Nikolas’ crushed phone may come into play as evidence. The video further incriminates Jason but Liz doesn’t believe he would hurt Nikolas.

Liz decides that Hayden is to blame since she knows about the diamonds. Liz blabs to Jordan about Hayden’s secret jewels and that catches the PCPD chief’s ear. Liz is pointing at Hayden who is pointing at Jason and Jordan isn’t sure what to think.

Jason and Sam conduct an investigation of their own into Nikolas, but how long until the PCPD, Sam and Jason figure out Nikolas is NOT dead, but is missing? Is this a plan hatched by Nik? Or did someone kidnap the Cassadine heir?

Liz urges Jason not to make things worse. The FBI may come ask Hayden about the diamonds – are those missing too? Laura and Lulu Spencer (Emme Rylan) fear their beloved Nikolas is dead and gone and then their lives are changed by a critical event.

Lulu and Dante Falconeri (Dominic Zamprogna) make plans, but the Cassadine mystery derails them. Diane Miller (Carolyn Hennesy) has incriminating info but is this about Hayden’s shady documents or does it tie to Alexis Davis (Nancy L Grahn)?

Molly Lansing (Haley Pullos) is critical of Alexis who is trying to work up the nerve to take action against Julian Jerome (William deVry). Alexis delayed once because of the Nurses Ball and may again because Lucas Jones (Ryan Carnes) is on life support and things look grim.

At General Hospital Hamilton Finn (Michael Easton) seems guilty of shady patient incidents. Dr Obrecht (Kathleen Gati) makes accusations then tells Carly Corinthos (Laura Wright) that Finn may have harmed her brother. Carly goes to Finn to try and get him to come clean about his issues.

Brad Cooper (Parry Shen) gets bad news about Lucas and alerts Julian. GH spoilers reveal that Bobbie Spencer (Jacklyn Zeman) has to make a heartbreaking choice. Is Lucas brain dead? Will they unplug him? Julian is stunned by the turn his once-happy life has taken.

Hayden finds Finn in bad shape and helps him and he tells her to forget what she witnessed. Finn may be hiding something that ties to the GH patient deaths even though he’s not to blame. Tracy Quartermaine (Jane Elliot) gets a call and it may be Finn looking for an ally.

Tracy tries to keep Sabrina Santiago’s (Teresa Castillo) for herself but the Qs won’t like her obsessive behavior. Dillon Quartermaine (Robert P Watkins) talks Kiki Jerome (Hayley Erin) into a first date but Morgan Corinthos (Bryan Craig) wants her back and may interfere.

Ava Jerome (Maura West) asks Sonny Corinthos (Maurice Benard) not to cut her out of Avery’s life even though she knows he has the leverage to do so. Sonny relents, they talk, and later he stuns Carly with a gesture he made. GH spoilers hint the custody battle will work out surprisingly.

Nathan West (Ryan Paevey) is determined to come 100% clean to Maxie Jones (Kirsten Storms) about Claudette (Bree Williamson) but it looks like he may not say everything he should. Claudette is coming to town soon!

Lucy Coe (Lynn Herring) is jealous of Laura and Kevin Collins (Jon Lindström) and launches a scheme to win him back. This involves someone coming to Port Chuck from out of town. Kevin will be thrilled to see who shows up but it might not work out in Lucy’s favor.

The big stunner of the week is that Naomi Dreyfus premieres (Robin Riker) and it looks like she’s sticking around for a while. Hayden will learn some interesting info about her family from Naomi. Is this the unexpected visitor to Wyndemere that GH spoilers promise or is someone else headed to town as well?

Don’t miss a moment of the big action on GH the week of Monday, May 30, through Friday, June 3, and check back with CDL often for detailed daily “General Hospital” spoilers.