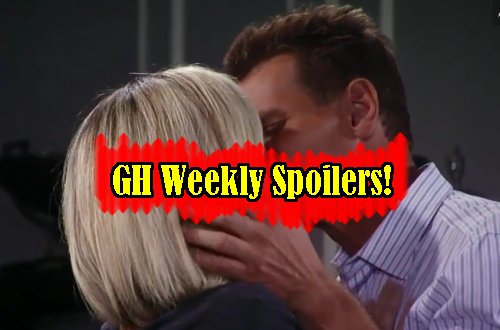 Jasper Jax (Ingo Rademacher) spends his final few days in Port Charles comforting Carly Corinthos (Laura Wright) who thinks her marriage to Sonny might be over. Carly wants Jax in her bed but will her ex get naked or hold her off?

Nelle is salting the wound to intentionally make Kiki feel bad about Morgan’s assumption Kiki was cheating before he died. Alexis Davis (Nancy Grahn) hosts Thanksgiving but it’s far different from last year when she and Julian Jerome (William deVry) were happy together.

Alexis crumbles under the stress and sneaks away to booze. As Alexis is bar crawling, she runs into Julian at the watering hole. Alexis threatens her ex-hubby but Julian threatens her back and says he’ll tell their daughter Sam Morgan (Kelly Monaco) she’s still drinking despite her promise to stay clean.

Alexis is close to hitting bottom and decides to drink with her ex and things get wilder from there. Also dealing with holiday stress is Tracy Quartermaine (Jane Elliot) who is juggling Hayden Barnes (Rebecca Budig) sick under her roof plus the usual family squabbles.

Looks like this could be another year with pizza rather than turkey at the Q mansion. Kiki and Dillon Quartermaine (Robert Watkins) spend time together. Dillon wants to be with her but Kiki is still struggling with guilt. Can Dillon make progress? Nelle’s snarky comments won’t help.

General Hospital spoilers indicate Julian has to deal with a blackmailer related to the bomb case – Oscar Jessup. Sam wonders if Jason Morgan (Billy Miller) should work with Curtis Ashford (Donnell Turner) to track down who put the bomb on Julian’s car. They team and find a clue that stuns them both.

Laura Spencer (Genie Francis) goes to see Sonny Corinthos (Maurice Benard) who might spend Thanksgiving behind bars. They talk about the loss of their sons and share some time bonding over their grief. Sonny faces arraignment but Michael Quartermaine (Chad Duell) shows to support him.

Ava Jerome (Maura West) appeals to Scotty Baldwin (Kin Shriner) to get the pills from Lucy Coe (Lynn Herring). He failed last time but this time, Scotty plays a dirty trick on Lucy to try and get the pill bottle from her. Even if it works, won’t that send Lucy running to Carly?

Ava gets little Avery for the holidays and makes the most of it. Dante and Lulu Spencer (Emme Rylan) share news with their loved ones and Maxie Jones (Kirsten Storms). Is this about their engagement? Remember there is a rerun GH on Thanksgiving Thursday and then no GH at all on Friday.

Share your comments below on these spoilers for the week of Monday, November 21 thru Friday, November 25 and check back with CDL often for the latest General Hospital spoilers and news.