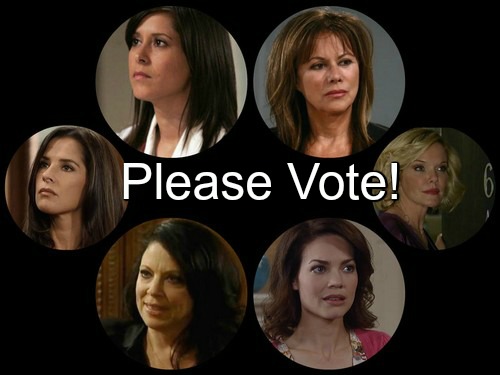 “General Hospital” (GH) spoilers reveal a special Mother’s Day review and poll. GH spoilers say that one troubled mom in Port Charles, Ava Jerome (Maura West), will soon get resolution on her custody suit. But she’s not the only mom in town that’s been accused of being less than an attentive mother.

Who do you think is the worst GH mom? Vote in the POLL below.

Robin is a beloved character and child of legacy characters, but she’s been a poor mom over the years. To be fair, it’s not always been her fault, but is seems like Robin has been absent most of Emma Drake’s (Brooklyn Rae Silzer) life. Poor Emma had some rough years and Robin could have chosen another path – like being with Emma over Jason Morgan (Billy Miller). Can Robin be blamed for being a bad mom?

Alexis is a hot mess who can’t make a good choice in a man to save her life. As a result, all three of her daughters have sketchy dads. Sam Morgan (Kelly Monaco) grew up without Alexis at all and she lost custody of Kristina Corinthos (Lexi Ainsworth) and lied about who her father was. Alexis also lost custody of Molly Lansing (Haley Pullos) – and now she’s throwing all their futures away because of a man.

Ava is a loving mother, but clearly is not always safe or decent. Ava lied to Kiki Jerome (Hayley Erin) about who her father was for most of her life and then slept with Kiki’s boyfriend Morgan Corinthos (Bryan Craig). Then there’s how she got pregnant with baby Avery – shagging Sonny Corinthos (Maurice Benard) in a crypt – and now she’s in a messy custody battle. Clearly, love is not enough to make a good mother.

Liz struggles to be a decent mom because she’s always got man problems. There’s also the matter of three different baby daddies and she’s had to face paternity questions before. Liz wasn’t watching Jake when he got run over (and then it happened again once he came back from the dead). Then Liz didn’t get Jake the help she needed because she was obsessed with Jake Doe aka Jason Morgan.

Liesl is a terrifying mother. It would be easier to count the times when Liesl was actually a good mother than when she wasn’t. Nathan West (Ryan Paevey) grew up not knowing Liesl was his mom at all and Liesl has killed to keep the secret of who’s his dad. Liesl encouraged Britt Westbourne (Kelly Thiebaud) to steal an embryo and entrap Patrick Drake (Jason Thompson). Let’s face it – Liesl is a nightmare mom.

Sam is on the roster because we never see her with Danny. Sam is always out and about doing her thing and she rarely mentions Danny. Sam is another mom who seems far more focused on the men in her life than her kid – with the notable exception of when Danny had cancer and then she was right by his side. And since Jason came back from the dead, we only see occasional family bonding.

Some of the moms on the list are definitely worse than others, but who do you think is the worst mom in Port Charles? Vote in the POLL and share your comments below.

Check back with CDL often for more “General Hospital” spoilers, news and more.