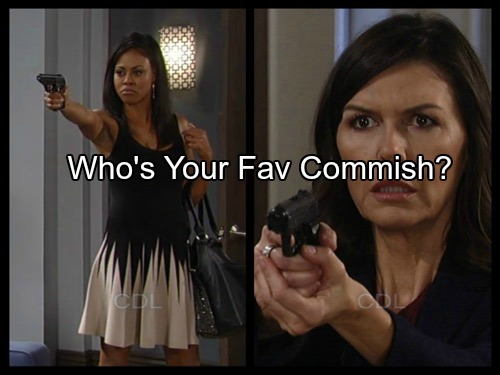 “General Hospital” (GH) spoilers reveal that Jordan Ashford (Vinessa Antoine) and Anna Devane (Finola Hughes) may soon be in contention personally and professionally. Whose side are you on? Who is your favorite Port Charles police commissioner – Anna or Jordan? Vote in the CDL POLL below.

There are three major investigations kicking off at the PCPD. There’s the Carlos Rivera (Jeffrey Vincent Parise) investigation plus the Nikolas Cassadine (Tyler Christopher) alleged murder and disappearance and also the brand-new GH serial killer case. Is Jordan up to the job?

It doesn’t seem like Jordan has had a lot of luck helming the PCPD. The only guy she sent to Pentonville is her baby daddy Shawn Butler (Sean Blakemore). Carlos escaped custody and was killed on her watch which has left Julian Jerome (William deVry) running free.

Can she bring in Julian for killing Carlos and also crack the other two cases? The GH serial killer will strike again in coming weeks and Jordan will assign newbie cop Valerie Spencer (Brytni Sarpy) to the case. That seems like an odd approach to a serious murder investigation. 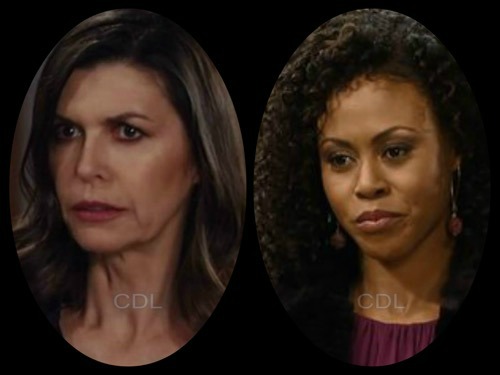 Is Jordan a good commissioner? By comparison, super spy Anna seems like she has the potential to be a much better cop and was PCPD chief for years. Then again, Paul Hornsby (Richard Burgi) is right under her nose and Anna hasn’t figured out that he shot Sonny Corinthos (Maurice Benard).

With Carlos dead, will that fact ever come out? Plus, Sonny is still walking around Port Charles free despite being a known criminal. Anna and Sonny will partner again soon to take on Julian, but does Anna have tunnel vision because she’s focused on Duke’s death and is ignoring other crimes?

Anna is the PCPD’s special investigator but it seems like she’s not doing a lot of investigating unless it interests her personally. Both Anna and Jordan have a lot of potential as commissioner but it seems both can get too focused on their personal agendas to listen to their “cop instincts.”

When Anna and Jordan work together, they are a force to be reckoned with, but right now they are splintered. Jordan thinks Andre Maddox (Anthony Montgomery) has a thing for Anna, and she may be right. But will that complicate their ability to solve the Port Charles crime cases?

What do you think of these two women as PCPD commissioner? Which is your favorite? Vote in the CDL POLL on who you like best in charge at the PCPD – and share your comments below. Be sure to check back CDL every day for more “General Hospital” spoilers, news and more.