General Hospital (GH) Spoilers: Who Was Luke’s Best Match – Tracy or Laura – Vote in Our Poll 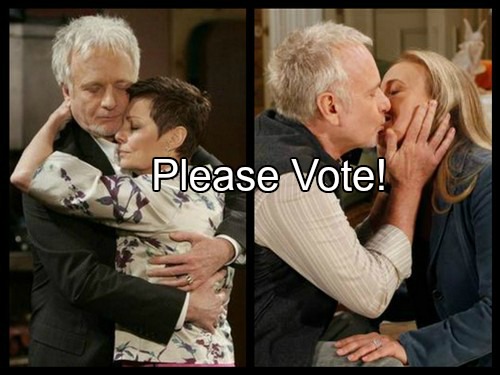 He was known for his lady loving ways; however, most would agree none of his conquests was anything more than flings except for two: Laura Spencer (Genie Francis) and Tracy Quartermaine (Jane Elliot). Who is the best match for Luke?

Arguably, no GH couple has come under more fire than the legendary super couple Luke and Laura Spencer. The couples 1981 television wedding brought in millions of viewers along with a cult-like following.

The young lovers’ storyline began in jaw-dropping fashion when a young Luke Spencer forces himself on Laura while they worked together. Viewers rooted for the couple as they spent generations together finding their way past the rape, going on adventures and built a family.

Despite the huge General Hospital following, some fans believe that Luke and Laura were never right for each other. Laura always wanted roots and a family while Luke’s wild ways prevented him from staying in one place for long. Though Luke eventually gave Laura her family, being a father was never a good fit for him. The love between the two was undeniably real, and it cost them both tremendously throughout the years.

It was a fake General Hospital marriage that sparked the budding love between Tracy and Luke. This coupling was an unlikely pair and began as nothing more than a con, one of Luke’s attempts to trick Tracy out of her money. Their love grew slowly as the dynamic actors build a fabulous rapport on-screen that was impossible to ignore, even for the biggest Luke and Laura fans.

Their cat and mouse love brought out a side of each character that allowed the veterans to grow. Luke brought out a vulnerable side to Tracy that fans did not know, but she also retained her strength that allowed her to understand who Luke was and give him the space to be that person.

Over the years, the couple created a partnership built on friendship and respect for one another.

Who was best for Luke? Was it his first, passionate love Laura or was it his more mature love with Tracy? Also, with Luke gone, are the women doomed to a loveless eternity or is there another love in the cards for them? Comments below and let us know what you think! As always, come back to CDL every day for more ‘General Hospital’ spoilers plus interviews, news and more.