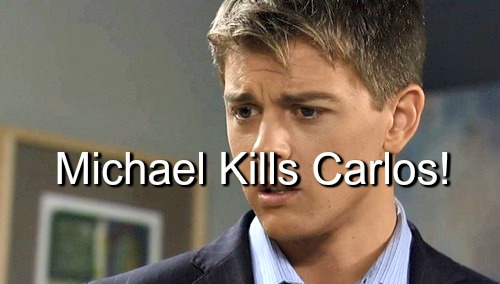 We know that Michael is concerned about the safety of Sabrina Santiago (Teresa Castillo) and that concern will grow in next week’s episodes. General Hospital spoilers reveal that Michael doesn’t think that Sabrina is with Carlos out of choice. Will he soon make a move to protect her?

Sonny told Michael that he would “take care of it” and we know that doesn’t mean anything non-violent. Despite the fact that Carly Corinthos (Laura Wright) asked Sonny to lay off the guns, we know he won’t. Guns are his stock in trade.

GH spoilers ask if Michael will worry that Sonny might accidentally hurt Sabrina in his quest to take out Carlos? Michael is right to be concerned since plenty of people have been hurt as collateral damage in Sonny’s mob games. Michael even took a bullet because of his adoptive father – as did Carly.

Sonny doesn’t want any of his kids in the mob, GH spoilers warn that he may not be able to keep Michael out of organized crime. And with Jason Morgan (Billy Miller) lost to him and Duke Lavery (Ian Buchanan) dead, Sonny is all alone aside from Max Giambetti (Derk Cheetwood) and some henchmen.

Can we expect to see Michael step up and get his hands dirty even though Sonny doesn’t want him to? Remember this is the young man who put an axe handle into his stepmom Claudia Zacchara’s (Sarah Brown) head when he needed to step up.

Michael was raised by Sonny even though his adoptive dad didn’t mean to school him in the way of the mob, it happened anyway because of what Sonny observed growing up. Michael was being taught to be a mobster every day of his life.

He’s Sonny reincarnate and so it seems inevitable that he will be like another young mob son – Michael Corleone (from The Godfather) – who will step up to fill his father’s shoes eventually. Michael bought a gun at age 12 and accidentally shot Kate Howard.

Then later when Michael found out that Sonny shot AJ, he was going to kill Sonny. Michael is no stranger to violent impulses and is even more cold, calculating and intelligent than his dad. In a way, Port Charles might be safer if Michael was in charge!

Protecting Sabrina from both Carlos and Sonny may be the first step in Michael’s baptism by blood. What do you think GH fans? Will Michael get his hands dirty to protect Sabrina? And if he does, will that make him as bad as Carlos in her eyes?

Share your comments below on how you see this violent story playing out and whether it will be Sonny or Michael that takes Carlos out… Be sure to check back with CDL often for more “General Hospital” spoilers and news.