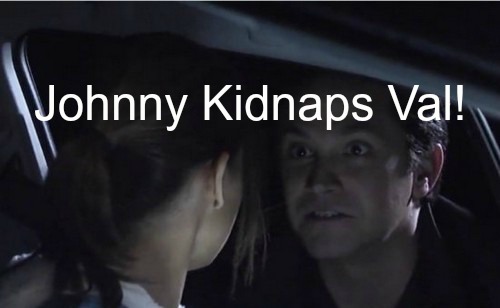 “General Hospital” (GH) spoilers from a new video released by GH showrunners show Valerie Spencer (Brytni Sarpi) in danger – possibly from an accidental blaze. Other confirmed GH spoilers reveal that Valerie’s life will be at risk this week – and we know the culprit is Johnny Zacchara (Brandon Barash).

The video shows Johnny gets to Valerie in a possible breakdown situation with her car. You’ll recall that Johnny sabotaged Val’s car before then showed up as kindly “Craig” to help her out of the jam. But this time when Johnny stops by Val’s car, it looks like he has dropped the nice guy act.

Johnny will tell Valerie, “Game over – you made yourself a big mistake.” The video doesn’t show Valerie in the blaze, but since we know that her life will be in danger this week, and the blaze looks to take place in some sort of shady place, Johnny may take Val someplace to give her a good scare.

While the original revenge plan seemed to be more focused on tying Valerie to Johnny with some trumped up bribery photos, maybe Johnny has decided to amp things up. He’s a known and habitual killer, after all.

The video isn’t clear on who ends up in the blaze, but our money is on cousin Val. Perhaps Johnny stashes Valerie in an abandoned building and leaves a candle burning for a bit of light then it gets turned over. If Valerie is tied up or locked in a room, a blaze starting would definitely put her life at risk.

For Johnny, killing Valerie is no sweat off his back – or his conscience since he has none. Johnny offered initially to take Valerie out for Lulu Spencer (Emme Rylan) and she noodled on it momentarily then told him she didn’t want her cousin killed.

But if Johnny thinks that Lulu would be happier with Valerie dead – and he knows how much Valerie sleeping with Dante Falconeri (Dominic Zamprogna) hurt Lulu – he would definitely be willing to kill her. However, in this scenario, it looks more like Johnny was trying to scare her and it goes awry.

The problem is, if Valerie survives (and there’s 99.9% odds on her living), will this confrontation with Johnny clue Valerie in that Lulu sent him after her? Very soon, Dante will know that Lulu sicced Johnny on Valerie. Even if Lulu tries to tell Dante that she told Johnny not to kill her, that’s no excuse.

From Dante’s perspective (and everyone else who finds out about this), Johnny is a known killer and Lulu sent him after Valerie. She knew she was potentially putting Val’s life at risk when she brought Johnny into this – and that’s unforgiveable.

Sleeping with someone’s husband is one thing – but murder (and conspiracy to commit murder) is in a whole different league. In fact, this could come out looking like Lulu hired Johnny to kill Lulu since we know she was planning on giving him money – wonder if that detail will come out?

This week, Valerie’s life will be in danger thanks to Johnny and Lulu – and someone drops off some photos at the PCPD – which Dante finds – of Lulu with Johnny. There’s a twist brewing there, too. Who would have had the opportunity to snap those pics?

And why would the person who took the pics not call the cops on Johnny? Here’s something to consider – Johnny had a guy taking surveillance snaps of him giving Valerie money. Johnny could have had the same guy snap pics of him with Lulu to drive Dante off the edge so their marriage is for sure dead.

Johnny wants Lulu with him. If he can create a scenario where Lulu is implicated with him in something that happens to Valerie – and Dante ends their marriage over it – he might be able to convince Lulu to run off with him.

Johnny is not exactly sane – and he wants Lulu. If he can make her a fugitive too, he might think that’s the best solution. However, GH spoilers also reveal that Johnny will be nabbed soon – possibly as a result of an investigation by Nathan West (Ryan Paevey).

Maxie Jones (Kirsten Storms) may rat out Johnny’s presence in Port Charles to Nathan because she doesn’t want Nathan to think she was helping Johnny and put her relationship with the hot cop at risk. Will Nathan nab Johnny or will it be Dante?

Will it be Dante that rescues Valerie from fiery peril? And will this incident drive Dante and Valerie closer – or convince Valerie she needs to stay far away from Dante? Is this scheme between Johnny and Lulu the last nail in the coffin of Lulu’s marriage to Dante?

So much to see here! Don’t miss a moment of this week’s GH episodes to see how the action all plays out. And check back with CDL often for tons more “General Hospital” spoilers and news.