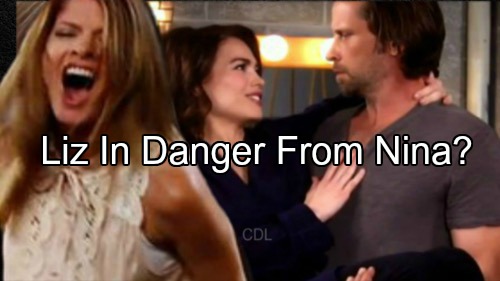 General Hospital (GH) spoilers reveal that Franco (Roger Howarth) and Liz Webber (Rebecca Herbst) will heat up this week with a kiss that stuns them both. Liz is worried about his dark side – but he’s not the one she needs to be watching. Nina Clay (Michelle Stafford) is the danger here.

When Nina gets wind of their romance, all bets are off, and her full crazy might come out once again. What then?

Franco goes to see Liz at her new digs – and even brings her a new toaster for good measure. But once they start talking, Franco finds himself confiding in Liz. At this point, although he feels a pull towards her, he doesn’t seem to have romance on the mind.

So it’s in the context of friendship that Franco tells her about Nina’s saucy offer of no-strings-attached sex. Liz’s reaction is not to be missed!

Liz will likely be a little icked out that Franco shared this intimate proposition with her but since they’re friends, she’ll hear him out. Franco will explain that he’s tempted because he cares about Nina, but it’s not what he wants. Franco doesn’t need the crazy in his life.

Life with Nina, because he’s a reformed lunatic, is like two alcoholics under the same roof. Either could drag the other down in a moment.

Franco craves normalcy and Liz, on the surface at least, appears pretty normal. Long-time GH watchers know that Liz has darkness in her too but she seems mostly sane. In a way, that makes her perfect for Franco. As Liz and Franco talk, things get closer physically and General Hospital spoilers reveal that by the end of the week, the two will lock lips.

There’s chemistry there that stuns them both.

Interestingly, GH spoilers tease that both of them will be taken aback by the kiss but neither will be able to stop thinking about it. That’s where things start to go South when it comes to Nina. The Crimson editor is fully expecting Franco to hop back in bed with her on a casual basis.

Nina will be fantasizing about Franco and their wild sex life. After a talk with Dillon Quartermaine (Robert Watkins), Nina gets more aggressive.

Nina will begin texting Franco with lurid offers to get together and roll in the sheets. Franco will consider the offer, think about that kiss with Liz and ignore Nina’s messages. But Nina won’t stop there. When her texts are ignored, she’ll find Franco to proposition him in person. 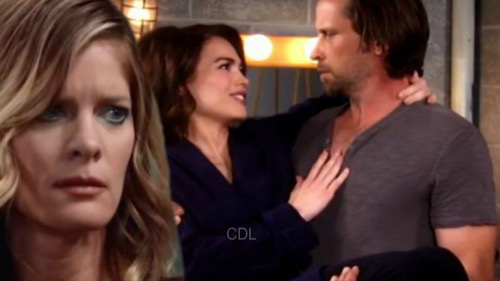 Franco will turn her down and then Nina figures out that it’s about Liz and will be angry and hurt.

For all of Franco’s talk about not wanting kids, Liz has three. Nina has none. Plus, it looks like Liz can have Franco if she crooks her little finger. It will be a slow burn before Liz and Franco consummate, but that won’t matter to Nina. She’ll see green because Liz is her rival and Nina will act out. Interestingly, General Hospital spoilers tease the Nina will pitch to Liz that she be the cover girl for Crimson.

Looks like that’s part of Nina’s crazy plot to do something bad to get Liz away from Franco. Will Nina plot an accident on the set of the cover shoot? There’s no telling what Nina will do – we know she can be downright dangerous when she’s off her rocker and losing Franco to Liz will put her back into the crazy zone and Liz could be in danger – and Franco too because he’ll try to save her.

Will Liz and Franco find their lives at risk over this new love? Is there any way that Nina can move on from Franco without doing something dastardly to try and win him back – or in revenge for losing him? What do you think GH fans?

Share your comments below on the new Liz and Franco romance and Nina’s inevitable insanely jealous reaction once she discovers that Franco has fallen for the beautiful nurse. Come back to CDL often for more General Hospital spoilers and news.