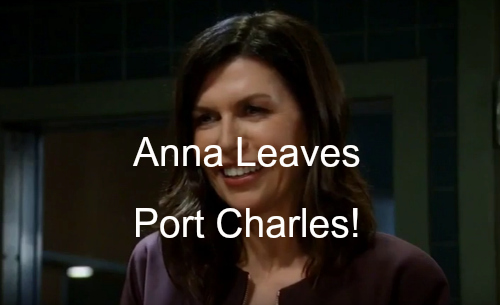 General Hospital (GH) spoilers reveal that Anna Devane (Finola Hughes) is leaving Port Charles for an extended break and has several storylines to wrap before she heads off to California. But don’t panic, Finola Hughes is taking her annual summer vacation – not abandoning GH.

Anna’s last day in Port Chuck will be Friday, July 8 and her on-screen absence will be explained as a prolonged summer visit to Berkeley, California to visit Robin Scorpio (Kimberly McCullough), Patrick Drake, and Emma Drake (Brooklyn Silzer).

Remember Felicia Jones (Kristina Wagner) and Anna just talked about Anna being lonely and missing her family, so the GH writers were already laying the groundwork for her month-long departure. As to what Finola is doing on her break, we’re not sure.

Last year, she directed a movie that co-starred Ian Buchanan (ex-Duke Lavery) so perhaps Finola Hughes is spreading her creative wings again over the summer with a new project. Her film, Byrd and the Bees is not out til 2017, so perhaps she’s working on edits.

Back in Port Charles, though, Anna has to deal with the arrest of Alexis Davis (Nancy Grahn) for the murder of Carlos Rivera (Jeffrey Parise). Anna well knows that Alexis didn’t do this and will work with the lady lawyer to exonerate her and bring the real culprit to justice.

Anna wants to see Julian Jerome (William deVry) behind bars ASAP but now she’s got an innocent woman in jail soon thanks to the evidence on the murder weapon. Anna and Paul Hornsby (Richard Burgi) will try and get Alexis to flip on her husband.

But that’s not the only storyline that Anna needs to tie up before she leaves town. You’ll remember that Emma set Anna up on a dating website before she left town and Anna has been checking out the messages even though she claims she’s not interested.

But General Hospital spoilers reveal that Anna will soon go on a blind date and she was checking messages from some guy who calls himself “Tender Legal.” Emma set Anna up with “Zero Dark Flirty” as Anna’s user name. 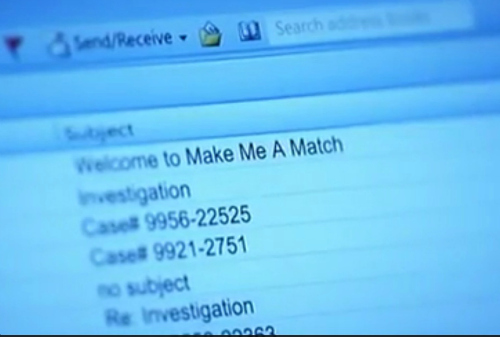 Next week, Anna will go on her blind date and that user name “Tender Legal” sure sounds like a lawyer, right? So who will Anna meet up with? If they’re going with an existing character, it seems like Paul, Scotty Baldwin (Kin Shriner), or Ric Lansing (Rick Hearst) are the likely suspects.

It would be a great twist if it was Paul since he’s made it clear that he’s got the hots for the British former spy and will do anything to get with her. Since Emma described her grandma as being involved in espionage, perhaps Paul recognized her description and replied.

Anna’s irritation at discovering Paul is her date would be great, but Scotty and Ric are also great alternatives since they are a lot of fun as characters. Of course, GH could bring in a new guy to play the role, but let’s hope not.

General Hospital spoilers also reveal that Griffin Munro (Matt Cohen) and Anna will have more face time before she leaves town and he’ll share some about his ex-girlfriend. Another GH spoiler says that Anna and Griffin get an unexpected visitor.

Anna will certainly be busy tying up loose ends before her California vacation. What do you think GH fans? Are you excited about Anna’s blind date? Can she bring Julian to justice before she exits Port Chuck for the summer?