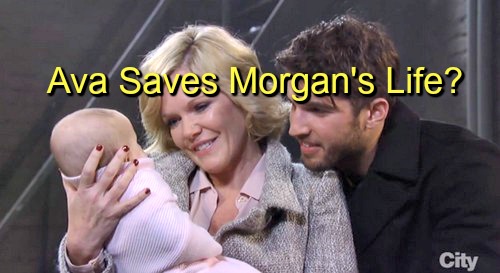 “General Hospital” (GH) spoilers reveal that Morgan Corinthos (Bryan Craig) and Kiki Jerome (Hayley Erin) will continue to have tangled fates. Right now, both are fighting for their lives. Does saving one mean saving the other? Will Ave Jerome (Maura West) try to save Morgan so he can save Kiki?

Ava is furious right now that Morgan’s reckless behavior put Kiki in the line of fire, quite literally, but then she relented at the last moment and let Morgan see Kiki before he was taken to the Freedman Clinic. We saw that Morgan got through to Kiki and she fluttered back to life a bit.

General Hospital spoilers ask if Ava will soon realize the deep bond between Morgan and Kiki and that Morgan needs to be by Kiki’s side in order for her daughter to wake? Problem is, Morgan is once again contemplating taking his own life thanks to a deepening bipolar spiral while he’s confined to the clinic.

As much as Ava hates Morgan right now, GH spoilers ask if she has to find a way to save him so he can save Kiki? There are a couple of ways this can happen. First, Ava can simply go see Morgan and tell him he has to pull himself together to save Kiki – and that he needs to think beyond himself.

Morgan really loves Kiki but Ava is a big part of the reason they split – so can he listen to Ava and act on it? If Morgan can hear reason, despite his mental illness, Ava has some truths to tell him. Even though Kiki was mad about the Darby Collette (Jesica Ahlberg) incident, she still came for him.

That must mean something. Can Ava pull Morgan out of it by telling him to live for Kiki and try again with her daughter? Will Ava giving them her blessing to try and flip his switch? Alternately, Ava could tell Morgan to live for his daughter and tell him that Avery is his kid.

There have been lingering GH spoilers that indicate that Morgan is Avery’s father despite the paternity test showing she’s not related to him. We all know that Port Charles’ paternity tests aren’t worth the paper they’re printed on, so it’s possible.

Alternately, Ava could flat out lie and tell Morgan he’s her baby daddy to snap him out of his funk so he’ll get healthy and go help Kiki out of her coma. Ava would absolutely lie to Morgan even knowing it could crash him back to the bottom later.

Ava would pick her kids over anyone else so telling a paternity lie is definitely in her comfort zone if it meant saving Kiki. As an added bonus, if Ava saves Morgan, Sonny Corinthos (Maurice Benard) would owe her and that is a big plus.

What do you think GH fans? Will Ava try and save Morgan so he can save Kiki? Would Ava stoop to telling Morgan a paternity lie about Avery? Or do you still hope that Morgan really is Avery’s dad? Share your comments below and come back to CDL often for more “General Hospital” spoilers and news.