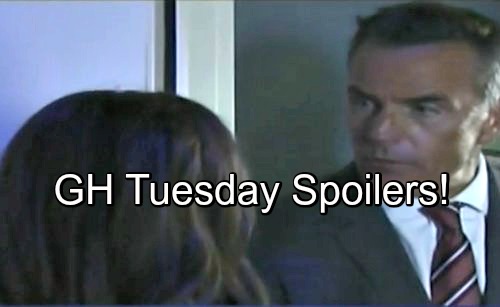 New General Hospital (GH) spoilers for the Tuesday, August 30 episode show us that presumed serial killer Paul confronts Hayden, Griffin is caught with his pants down, Nina grills her brother, Maxie gets some advice, and Ava makes a bold move.

Liz Webber (Rebecca Herbst) lies at the bottom of the stairs and Hayden Barnes (Rebecca Budig) is heading for the stairwell since the blackout has killed the elevators. Dirty DA (and presumed serial killer) Paul Hornsby (Richard Burgi) tells her not to go that way. 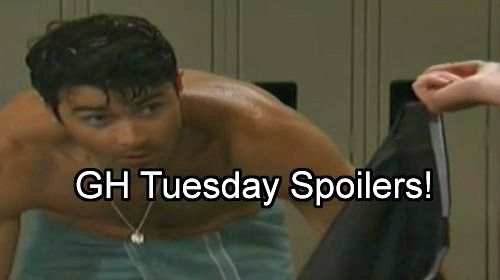 Paul says it’s not safe, because of the blackout, but soon someone else dares the darkness. General Hospital spoilers reveal that Franco (Roger Howarth) goes looking for Liz at the hospital to spill the secret to her that Hayden is her secret sister but that will have to wait for another day.

Franco finds Liz injured at the bottom of a flight of stairs and has to get her help. Also at GH, Griffin Munro (Matt Cohen) is once again dropping wet and fresh out of the shower (GH is getting their money’s worth with Cohen shirtless shots). 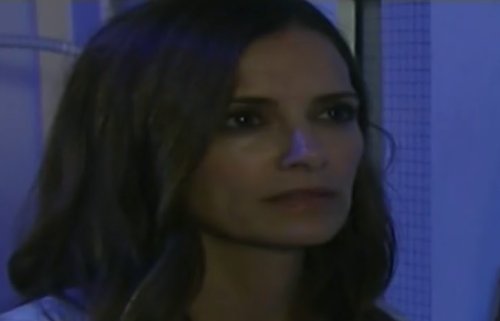 Claudette Boland (Bree Williamson) creeps up on Griffin holding his briefs and dangles them by a finger. No doubt Claudette is there for a sexy reunion, but will Grififn kick her out? Nina Clay (Michelle Stafford) chats up Nathan West (Ryan Paevey) and directly asks him if he still has feelings for ex-wife Claudette.

Nathan has to pause and think about it and looks a little uncomfortable with the line of questioning. Will Nathan admit to caring for ex-wife Claudette? Maxie Jones (Kirsten Storms) is also airing out some of her relationship issues with Felicia Jones (Kristina Wagner).

Maxie is still upset that Nathan went after Griffin when he found out he was the one sleeping with Claudette. Maxie tells her mother that Nathan should be fighting for her, not Claudette. Felicia offers some sage advice and GH spoilers reveal the wedding plans will stay in place for now.

Nina meets up with Claudette and drops a bomb on her little brother’s ex. Meanwhile, Ava Jerome (Maura West) makes a call to ask for a favor. She knows she saw Paul with the coin cufflinks and will soon try to leverage this in her favor. 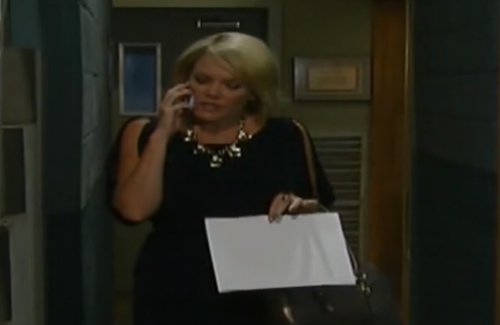 Andre Maddox (Anthony Montgomery) reports to Monica Quartermaine (Leslie Charleson) and Hamilton Finn (Michael Easton) that the source of the power outage has been found. They try to keep things calm as staff and patients begin to panic about the blackout and serial killer worries.

Will GH explain how left-handed Paul is the right-handed serial killer? Is he ambidextrous or is this another misleading artifact to throw off fans? The hands that shoved Liz down the stairs also changed. In the recent ABC promo video, we saw man’s arms with rolled-up sleeves. 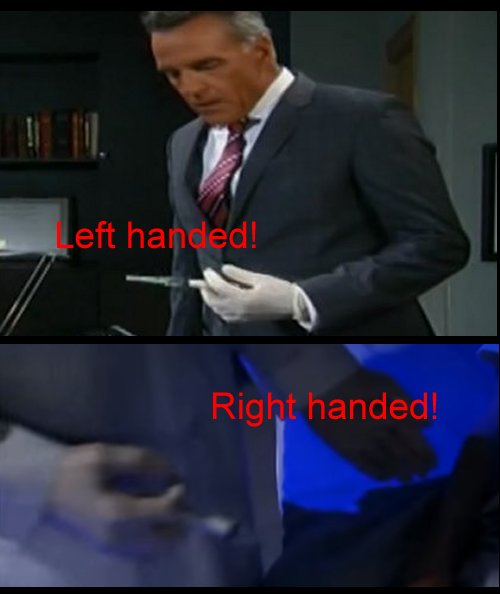 In today’s shoving incident, we saw gloved hands and long suit sleeves like Paul was wearing. Where are GH writers taking fans and is there a purpose in all this or is it more sloppy production shots like with Nikolas Cassadine’s (Tyler Christopher) mismatched tattoos?

Share your comments below on all the action at the hospital and check back with CDL often for all the latest General Hospital spoilers and news.