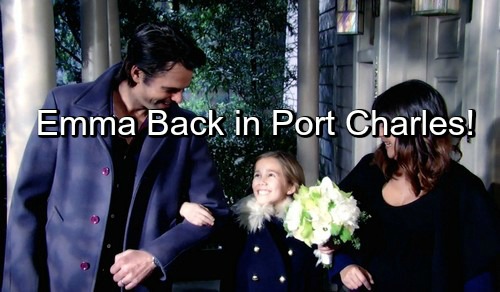 “General Hospital” (GH) spoilers reveal that next week’s episodes will see the return of two beloved characters and their portrayers to the ABC soap. Brooklyn Rae Silzer is returning for a handful of episodes as Emma Drake and Wally Kurth is back as Ned Ashton.

Tuesday March 29 sees Wally Kurth back in a recurring role as Ned and here’s some of what we know is coming. Initially, it was Dillon Quartermaine’s (Robert P Watkins) call to his big brother Ned that brought him back to see a seriously ill Tracy Quartermaine (Jane Elliot).

But by the time Ned makes it to Port Chuck, Tracy will be well on her way to healed thanks to Dr Hamilton Finn (Michael Easton). But that’s okay, because Tracy needs Ned to help her and the rest of the Qs fight to get ELQ back from Nikolas Cassadine (Tyler Christopher).

That story will take center stage and Ned and Dillon will get face time. Ned also gets to meet the new and improved Jason Morgan (Billy Miller) as Jason joins the fight to take back the family business. Ned will be surprised to see that Stone Cold is long gone, for now!

GH spoilers reveal that Wally Kurth will be recurring and that he will be introduced back into the fabric of life in Port Charles for regular appearances here and there as they make sense for the story and as it meshes with Kurth’s recurring schedule over on “Days of Our Lives” as Justin Kiriakis.

Nonetheless, Anna will make time for Emma and she’ll get to meet her “Uncle” Duke’s son Dr Griffin Munro (Matt Cohen). Spoilers from the General hospital set indicate that Griffin and Emma share screen time and that should be good stuff since Emma can offer a child’s perspective on Griffin’s dad.

We do wonder if Emma will get a visit from Spencer Cassadine (Nicolas Bechtel). It’s been a while since we’ve seen Bechtel – he’s had work at the Disney Channel and on the F/X OJ Simpson drama. We know Nicolas has been back on set, so fingers crossed Spencer and Emma shares some scenes.

What do you think GH fans? Are you excited about the return next week of Wally Kurth and Brooklyn Rae Silzer? Share your comments below on what you hope Ned and Emma will get up to while they’re in Port Charles. And check with CDL often for more “General Hospital” spoilers and news.