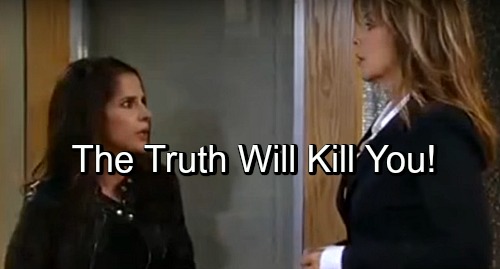 Today’s General Hospital (GH) spoilers tells us Anna Devane (Finola Hughes) is hot for the truth about Valentin Cassadine (James Stuart), Michael Quartermaine (Chad Duell) is falling in Nelle Hayes’ (Chloe Lanier) web of intrigue, Jason Morgan (Billy Miller) and Curtis Ashford (Donnell Turner) are getting closer to finding out who setup the bomb that killed Morgan Corinthos (Bryan Craig) and Alexis Davis (Nancy Grahn) is going to get sucked into Julian Jeromes’ (William deVry) life to save her career.

Ava Jerome (Maura West) is still plotting to get custody of her baby Avery away from Sonny Corinthos (Maurice Benard) the crooked mob boss. So off she goes to Sonny’s house to speak with him. No need to call ahead to check if he’s home, he’s wearing an ankle bracelet from the jail.

She figures that Sonny is off to Pentonville for Morgans’ murder and she’s positive that it was him who ran over her brother Julian. But Julian isn’t willing to prosecute Sonny for the car accident so Ava figures she can add that to his list of offenses to be sure he goes to jail.

But to here surprise Ava finds Carly Corinthos (Laura Wright) at the house with Sonny. With no love between the two women, Carly promises to kick her ass out of the house and rip out her hair by the roots, ahhhhh such classy broads.

Carly loves her husband, what a stellar man he is, she even says he’s a great father, but….. shhhh, she doesn’t know he slept with Nelle. So, with Ava believing Carly can drag her out of the house by her bleached blonde roots, she decides to leave but not before throwing some vicious digs about her parenting of Morgan.

Is Ava nasty enough to go to the Port Charles District Attorney Scot Baldwin (Kin Shriner) and bring Sonny to court for custody of Avery? Why not. She’ll use the fact that Sonny put a hit out on her brother and tried to run him down. Then what happens when trying to prove it?

Would Alexis step up and admit she is the drunken culprit and disappoint her girls? Would she take that chance and lose her license to practice law? She’s got a lot to lose for the indulgence in that bottle. Share your comments below and be sure to check back with CDL often for the latest General Hospital spoilers and news.

We are honored to have our talented #GH writers nominated for a Writers Guild Award! pic.twitter.com/NeqZPqFqB6