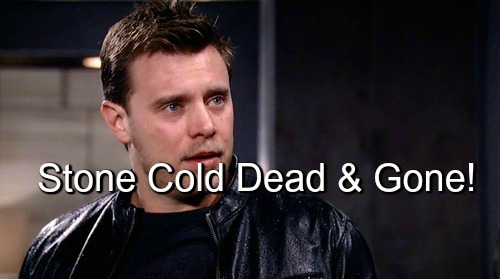 “General Hospital” (GH) spoilers reveal that Jason Morgan (Billy Miller) may not settle much longer for the confusing life he’s living untethered to his roots. This week’s episodes show that Jason wants to know more about his past as a Quartermaine and turns to Carly Corinthos (Laura Wright) for help.

Carly has always known Jason as “Stone Cold” but she knows the story of his past and how he became estranged from the Quartermaines. Carly will soon assist Jason on a mission to rediscover his past as a Quartermaine and the outcome will be remarkable.

Prior to now, Carly has clearly wanted Jason back with her and Sonny Corinthos (Maurice Benard) in his role as mob enforcer and Corinthos family protector. But with Morgan Corinthos (Bryan Craig) in a sanitarium and Kiki Jerome (Hayley Erin) clinging to life, things have changed.

Carly is still with Sonny, but she’s finally seeing more clearly the dangerous outcomes and risks associated with the life they’ve chosen. Carly may now be more open to Jason’s goal to remain distant from the mob – and the violent man he once was.

In this vein, General Hospital spoilers say Carly will tell Jason how he ended up the way he was – and his parents’ devastation when they lost Jason to mob life. Jason has always felt comfortable at the Quartermaine mansion, and that feeling will increase in coming days’ episodes.

Jason will recover a memory of himself with his grandma Lila Quartermaine that will be very important to him. After all, his last name Morgan was taken in honor of Lila since it was her maiden name. From there, it’s a short leap to Jason being ready to embrace himself as a Q.

Might we even see Jason change his name back to Quartermaine? He’ll soon spend time bonding with Monica Quartermaine (Leslie Charleson) that will be precious to her. If you know your Q history, you’ll remember how close Jason was to Monica before his accident.

Her own biological child AJ Quartermaine was a wastrel while Jason was the golden child of the Qs that Monica loved as much as if he had been her own son. And now that AJ and Emily Quartermaine are lost to her for good, getting another chance to love her last child will mean so much to Monica.

GH spoilers tease that Jason is moving further and further from his life as Jason Morgan and back to being Jason Quartermaine at long last. What do you think GH fans? Are you excited to see Jason go full-Quartermaine or were you hoping for a return to his Stone Cold status?