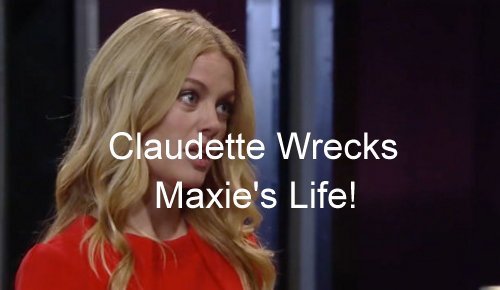 General Hospital (GH) spoilers reveal that Claudette Bolland (Bree Williamson) will soon take the first step in her agenda to get revenge on Maxie Jones (Molly Burnett/Kirsten Storms) for being involved with Nathan West (Ryan Paevey). Claudette wants Nathan back and plans to destroy Maxie. Claudette’s plan kicks off with sabotage at Crimson.

Claudette knows how much Maxie loves her job at Crimson and undermining that is a good way to make her rival’s life crumble. While Claudette will keep smiling to Maxie’s face and claiming to want a fresh start and closure from her relationship with Nathan, clearly that is NOT what she will do or what she has planned.

General Hospital spoilers reveal that Claudette wants to punish Nathan from moving on with Maxie, but mostly she wants to crush Maxie underneath her heel, and take back her ex-husband. Fortunately, both Maxie and Nathan are on high alert and are already watching for trouble coming from Claudette because neither buys her innocent act.

Claudette will begin to undermine Maxie at work in coming days – taking every opportunity to make Maxie look inept, as if she’s making mistakes, and is making bad judgment calls. Claudette may have misstepped, though, when she takes on Maxie and tries to shake up Nathan’s life. Nina Clay (Michelle Stafford) is extremely protective of Nathan.

What’s more, Nina may be flaky but she’s not dumb. And Nina has run enough scams in her day to recognize someone making trouble. General Hospital spoilers tease that Nina will stay loyal to Maxie and will recognize that she’s not making these mistakes and that Nathan’s ex is the one that’s making trouble at the magazine.

Nina won’t like this one bit. She already had to deal with Julian Jerome’s (William deVry) sabotage when he tried to bankrupt Crimson and crash it out from under her. No way will Nina tolerate Claudette trying to screw up her magazine. In coming days, Nina will task her new in-house private investigator Curtis Ashford (Donnell Turner) to look into Claudette and her shady past. 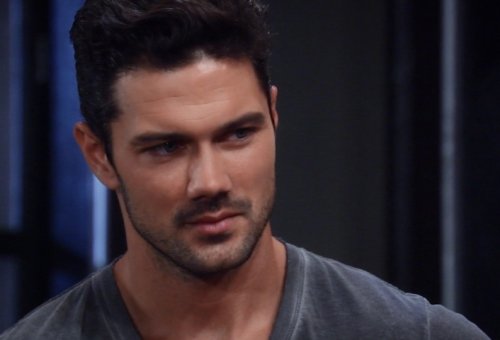 Curtis is the perfect person to dig into Claudette since he’s got a past as a skilled cop and has no problem blurring the lines. What will Curtis find out about Claudette? Will he discover the dirty details about Claudette and Griffin Munro (Matt Cohen) and how she lured him into breaking his vows? There’s lots more dirt to unfold around Claudette as she makes trouble in Port Chuck.

How long will it take before Maxie and Nina realize that it’s Claudette making trouble and setting Maxie up at the magazine? What do you think? Is there any way that Claudette’s plan will succeed in getting Nathan back into her life? Or will she further alienate Nathan when she wrecks Maxie’s life and makes him more certain than ever that he’s better without her?

Share your comments below on the Maxie and Claudette sabotage drama kicking off this week and check back with CDL often for all the latest General Hospital spoilers and news.