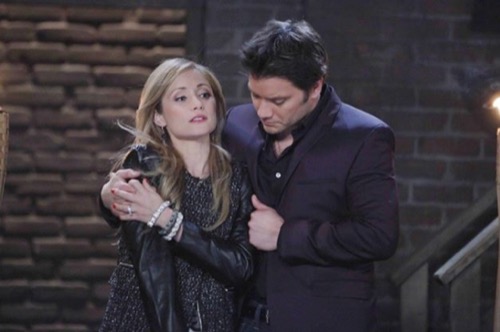 “General Hospital” (GH) spoilers reveal on an episode next week that Dante Falconeri (Dominic Zamprogna) will mess up the fresh start that he and Lulu Spencer (Emme Rylan) are trying to make with their relationship. And it’s all about Valerie Spencer (Brytni Sarpi).

GH spoilers reveal that Dante will mess up again soon when Lulu catches him with Valerie yet again. Remember that Dante and Lulu were about to get intimate for the first time in a long time when she freaked out because Dante had been with Valerie in their bed.

Lulu told him to burn the bed and they agreed that they would find a new place to live. But tossing out the mattress doesn’t change the past – and Valerie is still a fact of life. General Hospital spoilers suggest that Valerie’s affair with Dante still weighs heavily on Lulu.

Lulu’s jealousy resulted in Valerie almost being killed by Johnny Zacchara (Brandon Barash), so there’s a lot of hard feelings there still. Remember when Dante and Lulu talked about buying a house and having family over for a barbecue? Neither mentioned Cousin Val…

But Val is a Spencer and part of the Port Charles community now – and she isn’t the real problem – it’s Dante’s attachment to Valerie that is. When Dante and Valerie first met, she had just lost her mom and Lulu was not very sympathetic to her.

Dante was a source of comfort and they bonded as friends. For both of them, that friendship tether is still there, but Lulu doesn’t want them to have any attachment, friendly or otherwise. But for Dante, it’s a reality – he’s the kind of guy who’s naturally protective.

GH spoilers warn that when Dante sees Valerie out again with Curtis Ashford (Donnell Turner), he feels like he has to step in and warn Valerie about the choices she’s making. In fact, Dante should mind his business, take care of HIS girl, and let Val live her life. But he’s a Falconeri and they are busybodies.

When Dante tries to talk to Valerie about Curtis, she’ll be annoyed and they will bicker. GH spoilers tease that Lulu will see them together and will misinterpret the situation. Dante will insist he just wants Valerie safe but Lulu will think he’s jealous of Valerie seeing someone new.

This is another comedy of errors and misunderstanding. Bottom line is that Lulu doesn’t want Dante anywhere near Val for any reason. But Dante doesn’t feel like he can cut her totally out of his life even though he doesn’t want Valerie back in his bed and is committed to Lulu.

The best approach for Lulu may be to bring Valerie into the fold and treat her like family – you know they say to keep your enemies closer… But can Lulu move past her jealousy to try and make peace with Val? Or will she blow up at Dante and their relationship will be at risk once again?

GH fans are decidedly pro-Lante and anti-Valante, so let’s hope that the writers don’t get Dante and Valerie mixed up together again. And, let’s face it, bad boy Curtis is a hottie of extraordinary proportions, so Valerie should stick with him.

What do you think GH fans, should Dante butt out of Valerie’s life and quit putting his marriage at risk? Is he concerned for Valerie because he sees her as a friend – or is he jealous that she’s got a hot new man?