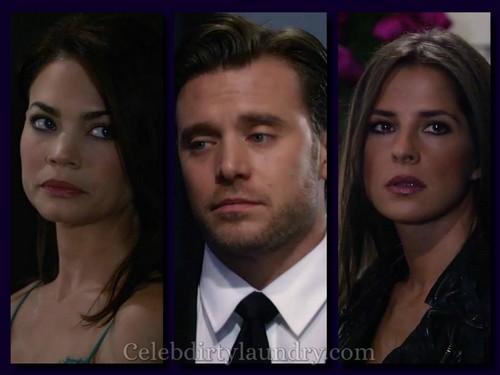 “General Hospital” (GH) spoilers reveal that the Liz-Jason-Sam storyline will continue to dominate the landscape at GH, yet the excellent actors in these critical roles were snubbed in Daytime Emmy Prenominations. This has us wondering if TPTB at ABC have a Jake Doe level of amnesia?

For any fans who might be upset by the announcement today (January 27, 2016) note that The Daytime Emmy prenoms are chosen by the soaps themselves – so anyone neglected or snubbed is the direct choice of TPTB on that soap.

GH fans expected to see a lead nomination for Billy Miller as Jason Morgan and either lead or supporting nominations for Kelly Monaco as Sam Morgan and Rebecca Herbst as Liz Webber. Yet the amazing work by these three actors in the biggest storyline of the past year were snubbed. Why?

There was some talk about backstage jealousy over a rumored Miller-Monaco romance, but there has to be more to it. Billy Miller took a nomination on his way out the door at The Young and The Restless in 2015 for his work as Billy Boy Abbott and did remarkable work at GH from the get-go.

Did TPTB at ABC fail to nominate him because they didn’t want to grant him back-to-back nods for two different shows? Is it because Billy Miller is notably absent from social media and doesn’t seem to be doing any GH fan events? He did them in the past at Y&R…

Perhaps it’s that Miller continues to pursue outside work including the Urban Cowboy pilot he shot last year and his guest spots on Suits, Major Crimes and CSI. Is he being punished for his acting aspirations outside of the soaps?

By failing to nominate Miller, TPTB at GH also couldn’t nominate Kelly Monaco or Rebecca Herbst since all three were part of the pivotal storyline. Did one of these three actors rub showrunners the wrong way and cost all three to be ignored for Emmy nominations?

Both Kelly and Becky routinely attend fan events – plus, neither of the ladies have anything going on outside of GH and there are no recast or exit rumors about them.

Miller has been plagued by exit rumors almost from the start of his GH run and although these have been dispelled, could there have been something there? Most of the other actors on GH actively promote the soap at fan events and social media, yet Miller continues not to do so.

Was the Emmy snub a power play by showrunners as a warning to Miller to be a team player if he wants the recognition he so obviously deserves? What other explanation can there be for this undeniable slap at the trio of players?

While the Liz-Jason-Sam storyline has been frustrating as it moved slowly along, it has also been highly polarizing and drew viewers by the droves. Jake Doe/Jason Morgan and his lady loves have clearly been the locus of popularity for GH for all of 2015 and carrying over into 2016.

So why no nominations for Billy Miller, Rebecca Herbst and Kelly Monaco? Share your thoughts in the comments below on these shocking Emmy snubs by GH showrunners and why you think is happened. And check back with CDL often for more “General Hospital” spoilers and news.