General Hospital (GH) Spoilers: Dr Griffin Munro Destined for Love – But With Whom? 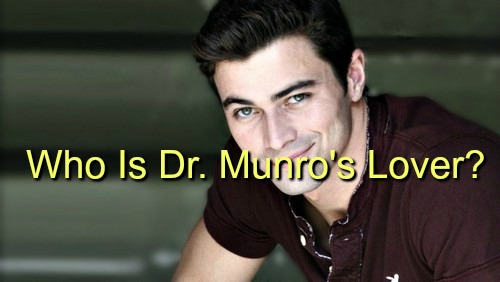 “General Hospital” (GH) spoilers tease that there’s much more to come for Dr Griffin Munro (Matt Cohen) as he starts his new life in Port Charles – and romance will be in the mix. Plus, Griffin supposedly has some ties to Port Chuck over and above his friendship with Lucas Jones (Ryan Carnes).

When Sonny Corinthos (Maurice Benard) met his new doc – although he didn’t know he was a doc at the time – they talked about St Aloysius of Ganzaga. Griffin said the medal for the saint is sometimes “worn by people living with AIDS and those who care for them.”

Could Dr Munro have a link to the Cates family? Sonny mentioned he lost someone to AIDS and we all know that’s Stone Cates. We also know that Lucas and Griffin went to medical school together on the West Coast – and when Jagger Cates left Port Charles, he moved to San Francisco.

If Griffin does have a link of some sort to the Cates family, that would cement his already blossoming friendship with Sonny. But the mention of HIV/AIDS and his friendship with Lucas also has us wondering if Griffin may be introduced as a new gay or bisexual character.

Right now, there are four gay characters on GH – Lucas and his BF Brad Cooper (Parry Shen) and Felix DuBois (Marc Samuel) and his rarely seen reporter sweetie Donny Sheldon. If Griffin is a gay or bi character, he may have a past relationship with Lucas which could bring some drama…

Since Brad is married to Rosalie Martinez (Linda Elena Tovar), bringing an ex of Lucas’s to town – particularly someone as smoking hot as Griffin – would be an interesting development for Port Chuck’s tiny gay population…

But since TPTB have just introduced the very real possibility that Kristina Corinthos (Lexi Ainsworth) is a lesbian that seems like a lot of LGBT storylines piling up for sweeps and would be odd and less than likely.

But you never know, the new writers don’t always seem to have a keen understanding of the preferences of their core demographic – women age 49 and up. If the showrunners are smart, they’ll have Griffin eligible for some lady loving – and Liz Webber (Rebecca Herbst) would be a prime choice.

GH spoilers indicate that in coming days, Liz and Griffin will butt heads over his treatment recommendation for little Jake Spencer (James Nigbor). This will come on the heels of Liz having a major life-changing moment that changes her course.

Liz will see finally that Jason Morgan (Billy Miller) will not be her man again because of her lies and since Jason will have just saved Sam Morgan (Kelly Monaco) from the raging fire at her house, it looks like JaSam fans will see their dreams come true as that super couple reignites.

Let’s face it – Liz needs a new man to distract her from her woes and I can see Liz and Griffin having sizzling chemistry. Plus, setting them up to argue right off the bat is a good sign – we all know that arguing leads to hot sex on soaps!

So what do you think GH fans? Do you want to see sexy new doc Griffin Munro wreaking havoc on Lucas’ relationship with Brad? Getting cozy with Felix? Or would you rather see him with Liz so she can move on from Jason for good?

Share your comments below and the come back to CDL often for “General Hospital” spoilers and news.