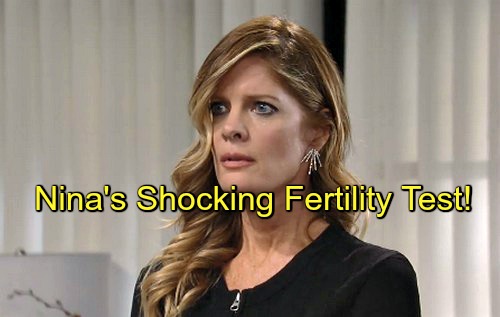 “General Hospital” (GH) spoilers reveal that the long simmering storyline of Nina Clay’s (Michelle Stafford) missing baby may come out soon. Nina has set up an appointment with Dr Kelly Lee (Minae Noji) on an episode this week and we’re wondering if the fertility testing could lead to surprising results.

There have already been multiple hints that Nina’s pregnancy while she was in the coma did not end in a miscarriage as she’s been told. Not only could Nina find out she’s fertile, but Dr Lee might be able to tell that Nina went through a full-term labor and delivery.

Delivering a baby leaves scars and signs on a woman’s body, so General Hospital spoilers ask if Dr Lee could spot something that’s inconsistent with what Nina was told by her evil mother Madeline Reeves (Donna Mills) and Dr Britt Westbourne (Kelly Thiebaud)?

Will Nina’s blood tests somehow be matched to Kiki Jerome’s (Hayley Erin) since Kiki is also in the hospital right now? It seems like the long-overdue reveal is coming that Nina has a living child.

Franco was joking and meant Crimson was her “baby” but Obrecht looked a bit alarmed. With Silas Clay (Michael Easton) out of the picture, perhaps Madeline or Liesl will come clean to Nina about her child being alive.

Or maybe Franco could access hospital files and figure it out…

If Nina’s child was born during her coma, Madeline would have gotten rid of it so that Silas and Nina would have no link in case her daughter ever woke up. GH spoilers have hinted for a long time that Kiki might be Nina’s daughter since Ava gave birth around the same time as Nina’s would have.

But GH showrunners could introduce a new character or make an existing character her child. There’s Darby Colette, there’s Rosalie, and it could yet prove to be a male. Who knows? What we do wonder is whether Nina is still fertile.

Should Nina be told she can have a baby, we can expect her to press a reluctant Franco into getting her preggers. He won’t like that, but she might be satisfied with a grown child so long as she can pamper and indulge herself as a mom to someone.

Let’s face it, though, Nina may be nutters, but she clearly needs a child. If nothing else, it will keep her from stealing someone else’s. And there’s still the whole controversy of her kidnapping baby Avery, since she felt like Ava owed her a child for stealing away Silas.

Could Ava literally owe Nina a baby? If Ava was given Kiki to raise and has denied both Nina and Kiki the truth, that would be major. But since Ava is repairing her relationship with Kiki – the lies about who her father is and her sleeping with her BF nearly wrecked them, would she come clean?

Don’t look for Ava to be the one to tell Nina that Kiki is hers – assuming she is. Again, Nina’s kid could be anyone male or female in their early 20s. And it could be someone we’ve not yet met. But it seems inevitable that Nina will get a child – whether a baby or a grown one – perhaps by May sweeps.

What do you think GH fans? Do you think Dr Lee will have shocking news for Nina? Do you hope that Kiki is her kid? That would at least get Kiki away from Ava… Share your comments below and come back to CDL often for more “General Hospital” spoilers and news.