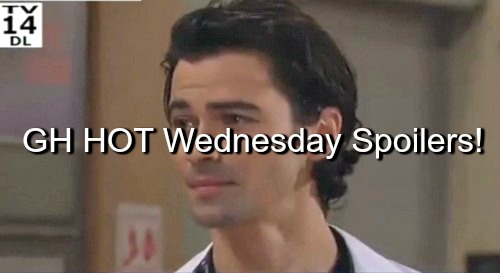 “General Hospital” (GH) spoilers for Wednesday February 10 reveal jealousy, confrontations, secrets and lies – and much of it surrounds ELQ and the mob mess that’s brewing. Check out what’s happening in these hot spoilers.

Dr Griffin Munro (Matt Cohen) is in his doctor jacket and ready to accept patients and it looks like Sonny Corinthos (Maurice Benard) is one of the first he’ll see. Carly Corinthos (Laura Wright) definitely likes the looks of Griffin compared to the old sour puss they last had.

Carly meets Griffin then Sonny needs to get Carly out of the way so he can talk to his new doc. Sonny is still not ready to let Carly know how much he’s progressing. We’ll see that Griffin is pretty savvy and he figures out what Sonny is up to.

The good news is, Sonny and Griffin already bonded before the doctor/patient interaction came into play, so this looks promising. Sonny tells Griffin that he can’t tell anyone about his progress. Epiphany Johnson (Sonya Eddy) gets some screen time on Wednesday – and an exciting new job.

Another of the Corinthos clan gets some story action when Michael Quartermaine (Chad Duell) meets with Alexis Davis (Nancy Lee Grahn). Are they talking ELQ? Looks like Alexis thinks Michael is looking to replace her – is this about the case against Nikolas Cassadine (Tyler Christopher) and his corporate raid?

Nikolas gets a verbal smack down from his mom Laura Spencer (Genie Francis). She is very displeased that he and Hayden Barnes (Rebecca Budig) ran off to Vegas and eloped. Laura will remind him that not only did he try to kill her but also that Hayden is not to be trusted.

Will Laura get through to Nikolas? Looks like he’ll sit down at his computer and Google his bride – hope he doesn’t use Bing or he’ll never find out anything… No matter what he suspects, Nikolas will keep up the pretense with Hayden so she doesn’t know he’s on to her.

Alexis gets a bit jealous when she sees her fiancé Julian Jerome (William deVry) joking around casually with baby mama Olivia Falconeri (Lisa LoCicero). Let’s hope Olivia is done mooning over Julian and won’t try to mess up the upcoming Julexis wedding.

Hayden meets with Tracy Quartermaine (Jane Elliot) with good news and bad news. The good news is, she talked Nikolas into marrying her. The bad news is Hayden seems to be trying to back out of their deal. Can Hayden talk Tracy out of exposing her past as Rachel?

Tracy will be angry and we can expect threats and more drama on this front. Is Tracy off kilter because of Hayden’s betrayal or is something else going on there? Nathan West (Ryan Paevey) tells Nina Clay (Michelle Stafford) that he and Maxie Jones (Kirsten Storms) are getting serious.

Nina is thrilled for her little brother and wants to hear all about it. Maxie, meanwhile, works on the next issue of Crimson with Dillon Quartermaine (Robert P Watkins). Seems like Dillon has a bunch of ideas and one of them may involve Maxie.

Don’t miss a moment of the Wednesday February 10 show for all the latest on these storylines. And be sure to check back with CDL often for more “General Hospital” spoilers.