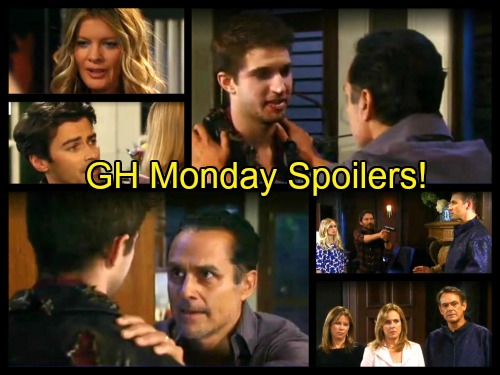 New General Hospital (GH) spoilers for the Monday, October 31 episode reveal that Valentin strikes fear in the partygoers at Wyndemere, Sonny finds himself tormented, Franco faces off with Jason, and Nina is deep in baby love with Griffin’s daughter.

Out at Wyndemere, Dante Falconeri (Dominic Zamprogna) flips out and pulls his gun on Valentin Cassadine (James Stuart) who insists he’s there legitimately and he does have a claim to the property. Ava Jerome (Maura West) is also at the party but who invited her?

And how long until Nathan West (Ryan Paevey) and Maxie Jones (Kirsten Storms) figure out the video shows Valentin pulling Claudette Bolland (Bree Williamson) off the airplane in Calgary? Dante is stunned to see Valentin in Port Charles since he was just assured the guy was locked up.

Kevin Collins (Jon Lindström) is shocked to see the man that almost killed him there in Laura Spencer’s (Genie Francis) house and Laura says shell-shocked, “This can’t be happening.” But it is happening. Valentin tries to get everyone to calm down and says he has a document that explains it all.

Looks like Laura and Hayden Barnes (Rebecca Budig) will both be out of a place to live since Valentin plans on making Wyndemere his base of operations while he’s in town. Over at the home of Sonny Corinthos (Maurice Benard), things are also pretty tense.

Sonny has been drinking too much and is tormented by a hallucination of Morgan Corinthos (Bryan Craig) back from the dead. GH spoilers tease these are some of the final scenes we’ll see the actor before he left GH for good.

Ghost Morgan tells Sonny that he came home to him. He’s battered, burned, bruised and looks like someone who just walked out of an explosion but since Morgan is dead and that guy looks undead we know this is Sonny’s mind playing horrible games with him.

Over at the MetroCourt, Jason Morgan (Billy Miller) has an interaction with Liz Webber (Rebecca Herbst) and Jake Webber (Hudson West) that sets Franco (Roger Howarth) on edge. Franco tries to control his jealousy but Jason doesn’t like him being there with her.

Liz asks Franco why he always has to assume the worst when she’s with Jason. If Liz and Franco would move their relationship into the “intimate” stage, he’d probably be a lot less frustrated and prone to attacks of jealousy.

Also at the party is Dillon Quartermaine (Robert Watkins) dressed as Elvis in a glittery jumpsuit and big hair to complete the look. He flirts with Kiki Jerome (Hayley Erin) and makes it clear he wants to be with her. Is Kiki too mired in guilt to open up to the chance at romance? 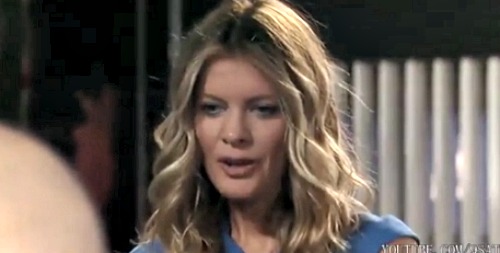 Nina Clay (Michelle Stafford) meets Charlotte Bolland (Scarlett Fernandez) who’s with her “dad” Griffin Munro (Matt Cohen). Nina already wanted to get her hands on Charlotte and once she meets the little girl, Nina is smitten. No good can come of that.

All this and more on the Halloween episode of GH on Monday, October 31. Share your comments below and be sure to check back with CDL often for all the latest General Hospital spoilers and news.

Travel back in time to #GH past and relive our spookiest moments. 👻 #ThrowbackThursday https://t.co/W6H9ieIJgs