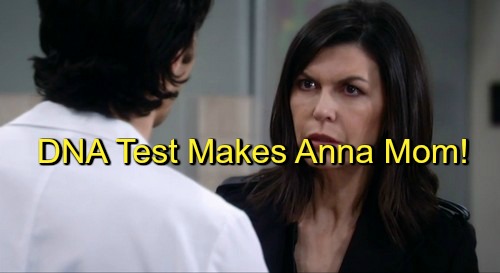 “General Hospital” (GH) spoilers reveal that Griffin Munro (Matt Cohen) will continue to stalk Anna Devane (Finola Hughes) on this week’s episodes but will soon be caught red-handed. Once Anna knows that Griffin is following her, she wants to know why. Could the tie between Anna and Griffin by familial?

It looks like it will be a while longer before Anna knows why the hunky doctor is shadowing her. But GH spoilers reveal that Dr Munro will soon draw in an ally to help him in his quasi-creepy mission. But who at GH would help the doc if it meant breaking the rules?

General Hospital spoilers tease that will be none other than Brad Cooper (Perry Shan), of course. Brad helped Bitt Westbourne (Kelly Thiebaud) with lots of evil schemes, so helping Griffin is not that much of a stretch. Plus, as it turns out, Griffin’s mission is much more honorable than any of Britt’s ever were.

To figure this out, we need to think about Brad’s role at GH. He’s the lab manager at General Hospital. That means he has access to all sorts of test results, blood samples, DNA info, and all sorts of other goodies. That indicates that Griffin might want something tested.

Does Griffin suspect that Anna might be his mother? GH spoilers ask is Dr Munro adopted and has traced his biological history back to Port Charles and Anna Devane? Will Griffin steal an item with Anna’s DNA on it (cup, napkin, etc) and ask Brad to see if they’re a familial match?

And if Griffin is Anna’s kid, is he Duke Lavery’s (Ian Buchanan) son? We know that Anna and Duke were pregnant back in the day, but Anna supposedly lost the baby when Olivia Jerome – Julian Jerome’s (William deVry) evil sister – crashed an elevator Anna was on.

Olivia was trying to kill Duke but caught Anna in her snare. Anna survived, but the story was that she lost the baby in the crash. Another snag is that child, even if it survived wouldn’t be old enough to be Griffin, but daytime shows SORAS kids all the time to age them up.

General Hospital spoilers claim that a paternity test explains why Griffin would enlist Brad’s assistance. Brad might have done hottie Griffin the favor anyway just because he’s gorgeous (have you seen the abs?) but if Griffin can also make a case that he’s trying to reunite with his bio-mom, Brad could be swayed.

After all, Brad was also adopted and had to find his biological parents so he would be totally sympathetic. Anna has been kidnapped before, so her eggs could have been stolen – or she could have been pregnant by Duke and then gave the child up to save it from their dangerous lifestyles.

Anna has been out of Port Charles on so many occasions that it would be easy enough for writers to add a pregnancy into an unknown period of her history. Fingers crossed that if Griffin is Anna’s child, though, he’s also Duke’s.

Anna needs some closure in her relationship with Duke and now that Robin, Patrick and Emma bailed on her and moved to California, Anna is feeling untethered. She just told Dr Andre Maddox (Anthony Montgomery) that no one needs her.

But if Griffin turns out to be her son, it could change Anna’s life drastically and give her a new family in Port Charles. What do you think, GH fans? Does Brad’s upcoming involvement as Griffin’s co-conspirator indicate Griffin is looking for a DNA tie between him and Anna?

Do you hope Griffin is Duke and Anna’s son? He’s certainly got the physical attributes to be a match for them and Anna did think he looked familiar the first time she saw him… Share your comments below on the Dr Munro mystery and check back with CDL often for more “General Hospital” spoilers and news.