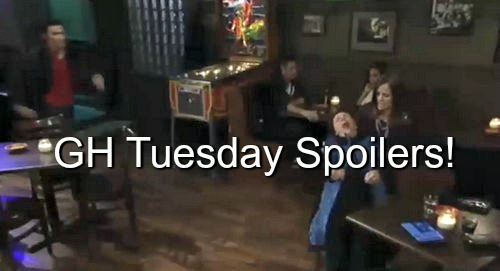 First of all, seems like Hayden Barnes (Rebecca Budig) is the nicest victim of blackmail ever – she is seriously committed to helping Tracy Quartermaine (Jane Elliot) even though Tracy kicking off would only help Hayden…

Dillon Quartermaine (Robert P Watkins) needs to talk sense to his mom about her health. He wants her checked out and Griffin seems the likely guy to do since he’s the hotshot new neurosurgeon. GH spoilers suggest Tracy has been poisoned, has she? Brain tumor? What?

Over at Shriner’s Hospitals, Sam Morgan (Kelly Monaco) shows up to see Jason Morgan (Billy Morgan) and Liz Webber (Rebecca Herbst) is stunned by what she sees. It looks like JaSam is 100% back on again and Liz has her feelings hurt even though GH fans say she has no room to complain.

Liz tells Jason that she didn’t realize he and Sam were so close again. Will Jason tell her it’s none of her business? He has to know this is killing her, but that’s not his problem, right? Nikolas Cassadine (Tyler Christopher) corrals Sam at Shriner’s and asks for status on the Hayden investigation.

What will Sam have to tell him? Will she reveal Tracy and Hayden’s cozy looking dinner at The Floating Rib? Back at GH, Franco (Roger Howarth) sits at Kiki Jerome’s (Hayley Erin) bedside begging her to come back to him.

Franco is the best pseudo-dad a girl can ask for. Later, Franco will head to Shriner’s in Philly to visit Liz and comfort his new BFF as she has a mini meltdown over the JaSam reunion. Franco is artfully eluding any further marriage and baby discussions with Nina Clay (Michelle Stafford)…

Will Ava come clean? Ava has had enough of this and is guilting out about Kiki’s shooting. Look for Ava to ponder telling Jordan the entire ugly truth. But then Paul should show up in time to shut down any truth telling. If there’s anything Paul hates, it’s the facts…

CDL General Hospital spoilers tease Ava will have a breakdown and Paul has to calm her down. They aggravate each other and each leaves the confrontation irritated. But at least neither of them is arrested! Julian Jerome (William deVry) will be back to check on Ava and Kiki soon, but first a wedding night.

Julian cuddles post-coital with Alexis Davis (Nancy Lee Grahn) and talks about how great their lives are. Fingers crossed it stays that way, but Anna is coming for him! Don’t miss the Tuesday March 1 GH episode this week and check back with CDL often for more “General Hospital” spoilers and news.