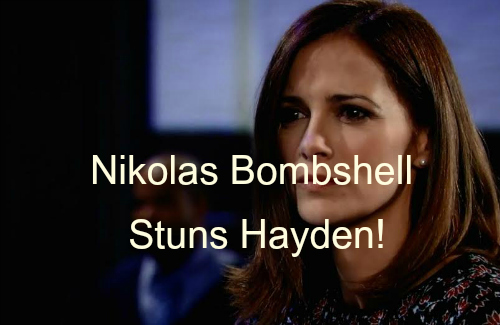 General Hospital (GH) spoilers reveal that Hayden Barnes (Rebecca Budig) will be left reeling with yet another revelation about Nikolas Cassadine (Nick Stabile) as she struggles to save Hamilton Finn’s (Michael Easton) life.

Hayden thought that it was bad enough that her husband hated and rejected her, but then he apparently died and left her penniless. Now, though, Hayden finds something out that disturbs her even more.

Although Nikolas scorned her for being a Berlin, he has a Berlin tie, too! Hayden will discover a link between Nikolas and her jailbird Ponzi-scheming father Raymond Berlin that absolutely floors her.

What could it be? Was Nikolas a victim of her dad? Or was he scheming with her dad? Nikolas has turned so dark over the past year, that nothing would surprise GH fans, but Hayden sure will be shocked.

General Hospital spoilers tease that as Finn’s condition declines, Hayden will try and figure out how to save the lizard-loving doc. Hayden will soon talk about Finn with Tracy Quartermaine (Jane Elliot) who also wants Finn to stick around.

Looks like the two co-conspirators turned foes will find common ground over their affection for Finn and will work together to save him. Is it Tracy that turns up the link between Nikolas and Raymond Berlin or is it something that Hayden finds out independently?

Remember that her father’s Ponzi scheme ruined Finn’s chance to continue his life-saving research which resulted in his wife’s death. Looks like it might also soon lead to Finn’s death since he has the same seemingly incurable disease that felled his wife.

The yellow stuff that Finn has been shooting up with is all that is keeping him from meeting his maker. But next week, Finn will find out something about his medication. Is it that he won’t be able to keep getting or making the drug? 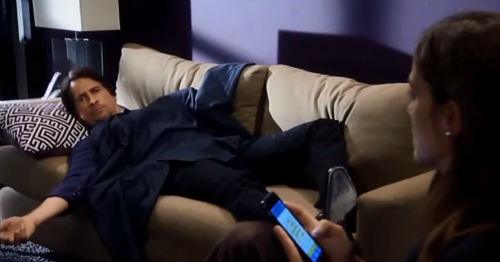 Since General Hospital spoilers hint that Finn’s condition will decline drastically soon, that could be why. Was Nikolas somehow involved in the research funding as well? Is Nikolas just as responsible as Raymond Berlin for Finn’s research getting shut down?

GH spoilers tease that Finn wants to focus on his life-saving research but is distracted. Finn can’t get Hayden off his mind even though he fights to forget her and tries at every turn to push her out of his life.

Finn seems to be plagued with women who keep butting into his life including Hayden, Tracy and Carly Corinthos (Laura Wright). All this is made worse because Monica Quartermaine (Leslie Charleson) has suspended Finn from GH.

Finn really needs access to the research lab there to continue his work so he can try and save himself. Will Tracy make a bold move to reverse his suspension so he can get back to work?

Monica and Tracy will butt heads over Finn while Hayden scrambles to do everything she can to save Finn’s life. How long until Finn and Hayden admit they’re falling for each other? Hayden still has to get closure on Nikolas.

Right now, she still thinks he’s dead but the truth will come out soon enough that he faked his death and ran off. By the time she finds that out, Hayden will already be on her way to falling for Finn – and she already loves Roxy, his lizard.

What do you think GH fans? What was Nikolas’ tie to Raymond Berlin? Was Nik a hypocrite to slam Hayden when he found out she’s really Rachel Berlin when he was involved with her dad? Share your comments below.