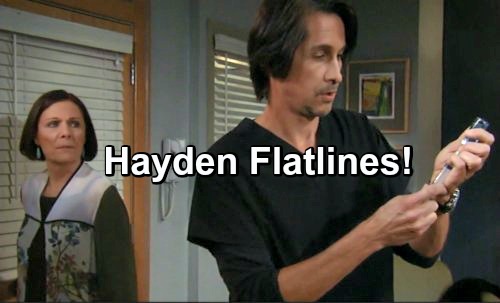 General Hospital (GH) spoilers from a new promo video reveal that Hayden Barnes (Rebecca Budig) is in much worse shape and at death’s door. Her sepsis has returned and Hayden flatlines just as Hamilton Finn (Michael Easton) comes up with a drastic treatment that could cure or kill her.

Hayden begins the Monday, December 19 episode at the Quartermaine mansion doing poorly with Tracy Quartermaine (Jane Elliot) reading her gossip magazines. Tracy tells Hayden she cares for her and sees a lot of herself in her. 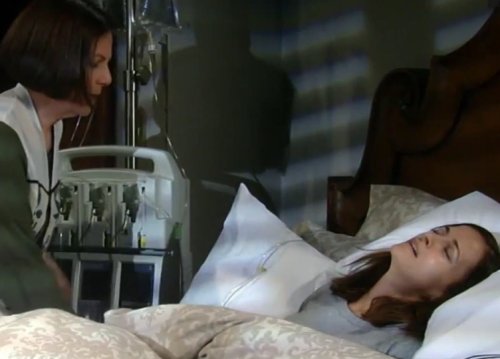 Hayden’s fever spikes and Tracy calls in Liz Webber (Rebecca Herbst). Liz insists her sister must be taken to GH or she’ll die. A random doc confirms the sepsis is back and he puts Hayden into a medically induced coma so they can chill the fever and fight the infection.

Tracy will pace beside Hayden’s bed and then Finn comes in with the treatment. He says it’s untested and is a death sentence or a disease cure. He plans to test it on himself but then Hayden flatlines. Finn makes a snap decision to test it on Hayden instead. 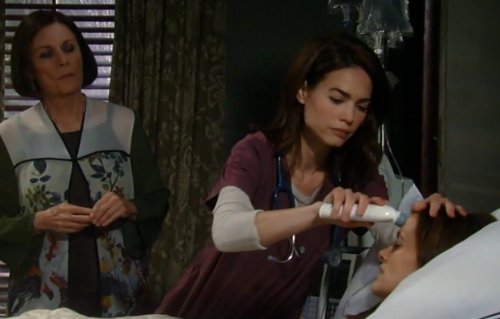 Finn spends the night by Hayden’s bed watching and waiting to see if she can pull out of her crisis. Other General Hospital spoilers say Hayden recovers, but there will be a cost. The random doc mentioned brain damage from the fever, so Hayden might come out of his with neurological issues.

The last time Hayden came out of a coma, she faked amnesia. Will her amnesia this time be for real? While Hayden was dying, she admitted love for Finn, and after he gives her the cure, he’ll finally admit he loves her. He wants her to wake so they can be together. 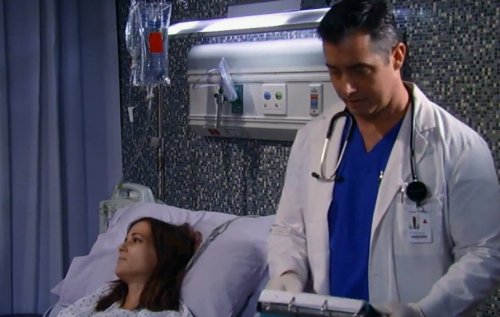 But when Hayden wakes, their love will go off track because she doesn’t know who he is. Hayden thought Tracy was her mom when she was hallucinating and might now think this again. Tracy will play along since she views Hayden as the daughter she never had.

But things take a strange turn when Hayden’s real mom Naomi Dreyfus (Robin Riker) turns up later this week. Liz called her when she found out Hayden was dying and she’s finally made it to Port Charles, but will Hayden shun her since she thinks Tracy is her mom? 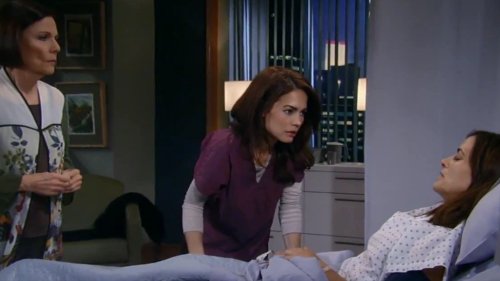 Hayden’s life could change in an instant. Tracy will want to take Hayden home and keep playing mommy to her for as long as the amnesia lasts, but Naomi will be furious that Tracy stole her daughter. Will it be Naomi that presses charges against Finn?

Some GH spoilers hint that Finn will be arrested for administering an illegal, untested treatment. It could be Naomi that has him locked up or Liesl Obrecht (Kathleen Gati). Naomi thinks he’s a dangerous junkie and didn’t want Hayden near him and Dr. O hates Finn. 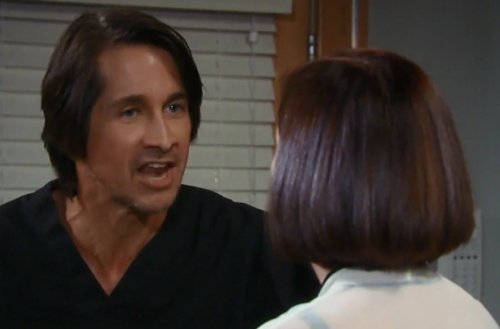 Lots of drama to come for Finn and Hayden this week. Even though the cure is at hand and they’ve swapped an I love you, they won’t get their happy ending for a while. The cost of the cure is their love and Finn will have to win her back.

Share your comments below on Hayden’s flatline crisis and tune into CDL often for the hottest General Hospital spoilers and news.