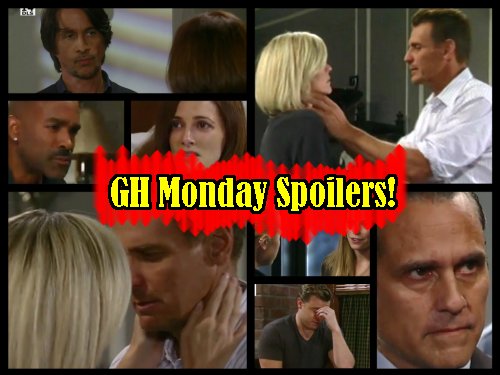 Hot General Hospital (GH) spoilers for the Monday, November 21 episode reveal that Sonny has a date with a judge but is fighting it, Curtis helps scared Hayden, Jason and Curtis team up, Nelle gets sketchy, and Michael stands up for his dad.

At the PCPD, Sonny Corinthos (Maurice Benard) is in a suit and prepares for his arraignment. Diane Miller (Carolyn Hennesy) is confident she can get his confession tossed out. Dante Falconeri (Dominic Zamprogna) is firmly on the side of law and order and against his father.

Dante and Jordan Ashford (Vinessa Antoine) get their ducks in a row to face off against the mob boss in court. Dante’s brother Michael Quartermaine (Chad Duell) shows up to stand by his dad. Dante won’t like facing off against two of his family in court.

Will Sonny walk out of court a free man thanks to Diane’s clever legal footwork? Or is he destined to spend the holiday eating jailhouse Jell-o and a turkey sandwich? Will Michael and Dante have to take the stand to testify about Sonny’s confession?

Jason Morgan (Billy Miller) worries that Sonny won’t fight in court like he should and even if he finds out the truth, it’ll be too late. Curtis Ashford (Donnell Turner) is suspicious of how quickly Julian Jerome (William deVry) fired him.

Curtis and Jason get together and although Sam Morgan (Kelly Monaco) worries whether Curtis can be trusted, the guys work together and discover a shocking new clue. Curtis also goes to see Hayden Barnes (Rebecca Budig) at the Qs.

Hayden tells Curtis she’s terrified. Her bloodwork is due back and Hamilton Finn (Michael Easton) is also sweating it while he waits on her test results. Tracy Quartermaine (Jane Elliot) talks to Finn about a lie he told Hayden and says she knows why he told it.

Carly Corinthos (Laura Wright) wants to take comfort in Jasper Jax (Ingo Rademacher) and wants to take him to bed. Jax isn’t sure –he knows Carly is deep in grief and is using him to make herself feel better but will he give in to her desires?

Nelle Hayes (Chloe Lanier) overhears something – it might be about Carly and Jax because Nelle asks Kiki Jerome (Hayley Erin) whether she thinks they might get back together. Kiki is a fan of Sonny and Carly and might wonder what Nelle is up to and why she’s asking.

Nelle also prods the open wound that is Kiki’s grief over Morgan Corinthos’ (Bryan Craig) death. Nelle makes her feel even guiltier than she already does. Families in Port Charles are gearing up for Thanksgiving and Alexis Davis (Nancy Grahn) insists on hosting.

Alexis needs a distraction from her boozy incident at the cheap motel. Tracy also preps for the Quartermaine Thanksgiving which, by tradition, always goes badly. This year will be stressful with a secret lab in the house and an infected woman dying upstairs.

Stay tuned to CDL every day for fresh General Hospital spoilers and news.