“General Hospital” (GH) spoilers for the Friday March 11 episode are pushed to Monday March 14 – GH has been preempted on Friday for Nancy Reagan’s funeral. Check out what’s happening for the 3/14 GH. Lots to see on Monday including Helena’s big will reading!

We’ll see Maxie Jones (Kirsten Storms) run into a dripping wet Griffin Munro (Matt Cohen) in a towel. Thanks to GH showrunners for continuing to offer weekly eye candy in the form of shirtless Griffin. We’ve never seen that GH bathroom before and now he’s there constantly undressed.

General Hospital spoilers ask why was Maxie in the men’s room? She had some photos for someone – is Maxie doing wedding planning for Lucas Jones (Ryan Carnes) and Brad Cooper (Perry Shan)? No doubt Maxie will enjoy the view but it will be awkward – can’t wait to see.

The object of Griffin’s stalkerish attention, Anna Devane (Finola Hughes), is still with Andre Maddox (Anthony Montgomery) talking about why the doc is on her tail. Jordan Ashford (Vinessa Antoine) does not like seeing Andre and Anna looking so close.

Of course we know now that it’s been confirmed by TPTB that Griffin is not Anna’s son but Duke’s! CDL will have a special report with all the shocking details coming up shortly! 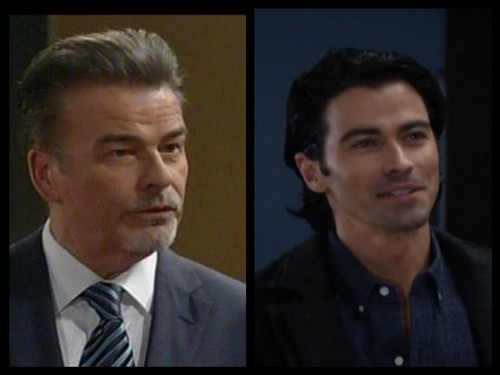 Anna defines for Jordan exactly what the relationship is between her and Andre. GH spoilers tease that we notice a moment of panic on Andre’s face. Does he think Anna is about to blow up his new relationship with the PCPD commish? No doubt Anna will say they’re just friends.

Dante Falconeri (Dominic Zamprogna) and Nathan West (Ryan Paevey) talk about their relationships – because that’s what men do… Nathan is trying to focus on the future with Maxie but he’s got to move past the Claudette issue.

Looks like Nathan will finally spill what’s going on with the woman he seems to still love. Who is she and is she the reason Nathan left NYC and came to Port Charles? Will Dante then tell the Claudette secret to Lulu Spencer (Emme Rylan)?

These two are due at Helena’s will reading on Monday’s episode – as are a handful of other Port Chuck people. Scotty Baldwin (Kin Shriner) greets everyone and all are surprised to see he’s not reading the will – it’s a video with Helena’s last words from her own mouth.

No doubt these words will be unpleasant for most to hear. Will Helena stun Nikolas Cassadine (Tyler Christopher) when he finds out he’s not the sole heir of the Cassadine fortune and legacy? Is there another Cassadine male heir older than him?

General Hospital spoilers have hinted at this for weeks – Nikolas has been way too cocky about the will so no doubt he’ll be shocked. According to GH spoilers, Laura Spencer (Genie Francis) will set out an adventure after the will reading because of what she’s told.

Some GH fans have speculated (and worried) the writers are recycling the endlessly annoying Katherine Chancellor music box storyline from “The Young and The Restless” since the GH co-head writers were working at Y&R during that plotline. Let’s hope not…

Liz Webber (Rebecca Herbst) is there for the will too – fingers crossed we’ll finally find out something about Jake Spencer (James Nigbor) and what happened on Cassadine Island. With James Nigbor’s surprisingly abrupt recast news, we wonder if that plays into the will reading story.

Sam and Alexis are black sheep Cassadines, so no telling what awful things Helena has for them. Laura is the mum of Helena’s beloved Nikolas, so we wonder what she has for her. Lulu is also invited and she and her mom both have ties to Stavros, so that’s a head scratcher as well.

Don’t miss a moment of the show. Friday’s usual episode for March 11 has been postponed until Monday March 14 so that means we’ll have cliffhanger action at the start of next week instead of tomorrow. Be sure to check back with CDL for week ahead “General Hospital” spoilers plus news and more!