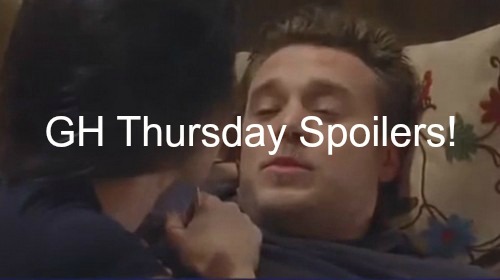 “General Hospital” (GH) spoilers reveal that on Thursday’s episode, March 3, lovers surprise us and parents get crushing news. We can expect to see on tomorrow’s episode that Sonny and Carly will get upsetting news about Morgan, Liz has bad news for Jake, Sam and Jason wake in each other’s arms, and Franco is not happy with Nina. Here’s a look at what’s coming.

Diane says she’ll try the old “Miller Kung Fu” to possibly keep him out of prison, but Sonny and Carly have some tough choices to make. They really shouldn’t be surprised by this given what they know about the law and about what Morgan did.

But if Diane can bring Franco’s (Roger Howarth) tumor to court and get a serial killer exonerated, she can do anything. Sonny and Carly’s marriage is getting mighty tense. Is Carly reconsidering her life as a mob moll? Does she finally see the danger Sonny brings?

GH spoilers warn us that Morgan’s parents have to make some hard decisions regarding his future based on Diane’s recommendations. Meanwhile, Morgan is clueless as to how deep the doo-doo is that he’s in but Michael Quartermaine (Chad Duell) tries to get him to see the light.

Morgan is in total denial – which makes sense as he’s off the deep end with his bipolar. If Morgan does go to jail, perhaps as the third Corinthos to go to Pentonville he’ll get a cell upgrade… Morgan won’t like what his parents decide.

Maxie Jones (Kirsten Storms) is still concerned about the Claudette thing and Lulu Spencer (Emme Rylan) counsels her to trust Nathan West (Ryan Paevey). But Maxie has been burned by liars before – and had a front row seat to the Dante Falconeri (Dominic Zamprogna) cheating mess.

Maxie returns the favor and tells Lulu to get back with her hubby. Later, Maxie also has advice for her boss Nina Clay (Michelle Stafford). Is this about work or about her family making plans she’s moving full speed ahead with?

Franco (Roger Howarth) isn’t happy on Thursday’s episode that Nina isn’t listening to him about slowing her baby roll. Nina pushes – what will Franco do? Franco’s new BFF Liz Webber (Rebecca Herbst) tells Jake Spencer (James Nigbor) that she has good and bad news for him – is Jake checking out of Shriner’s soon?

Also, looks like Sam Morgan (Kelly Monaco) and Jason Morgan (Billy Miller) spent the night together in each other’s arms!! Too bad it was a clothes-on snoozefest. But when they wake together on the sofa, will things finally heat up for JaSam?

Don’t miss any of the action on the Thursday March 3 GH episode and come back to CDL often for detailed daily “General Hospital” spoilers, news and more.