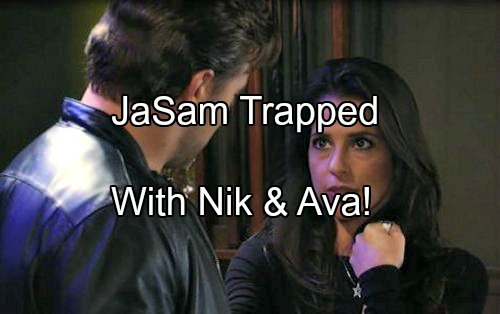 General Hospital (GH) spoilers reveal that Jason Morgan (Billy Miller) and Sam Morgan (Kelly Monaco) will track Nikolas Cassadine (Nick Stabile) and Ava Jerome (Maura West) to Cassadine Island. But this will not be what Sam and Jason hope for and things turn dangerous!

We just saw that Ava and Nikolas have taken off via private jet to Greece – once they land, they’ll head to Cassadine Island. General Hospital spoilers reveal that Sam and Morgan will track them down there with the goal in mind to nab Nik and take him back to Port Charles.

However, as this whole plot has gone, nothing will turn out as Sam and Jason have planned. Think about it. First, Jason was on the cusp of being arrested for Nikolas’ death and then Sam was held at gunpoint by the fake ID maker/pawn shop owner.

Next, Jason and Sam had to deal with wacko Brit Huxley Lynch (Trent Dawson) and Sam took off to the airport once she heard that her mom, Alexis Davis (Nancy Lee Grahn), had been arrested. Plus, Jason has to fight off a random henchman of Huxley’s. 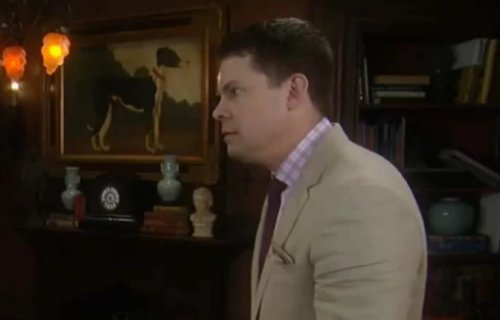 Now that Jason has that guy tied up, let’s hope he escapes unscathed from Huxley’s estate, but no doubt this trouble will follow them, just as Ava expects it to. No way is Huxley done chasing the “Weeping Nyad” statue.

By next week, Ava will be spooked by events that occur. (Remember there is no show on Monday, July 4) But on the Wednesday, July 6 episode, Sam, Jason, Nikolas and Ava will land in danger because they find themselves trapped.

General Hospital spoilers indicate the Sam and Jason will be jubilant upon discovering Nikolas with Ava on his family’s island, but then things go badly off course. Instead of grabbing Nik and heading back to Port Chuck, Sam and Jason find themselves stuck and in peril.

But why are the four of them in danger? After all, this is the Cassadine family estate, so why would Nikolas end up trapped? There are many secrets yet to unfold. Huxley will continue to pursue them and that’s a problem. 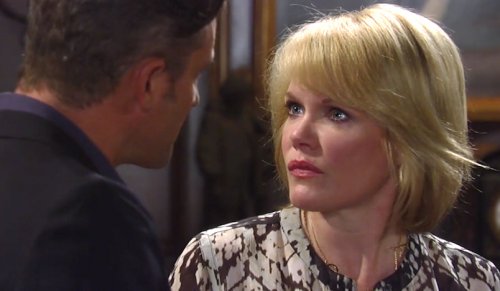 But there may also be Cassadine factions on the island that do not respect Nikolas’ authority there. The bottom line is these four may have to band together and fight for their lives because the forces they face are far worse than any drama between them.

General Hospital spoilers tease there may be other Cassadines on the island. We’ll have to wait and see how that plays out! The bottom line is, Sam and Jason have to get Nik back to Port Charles in one piece or else Jason will be arrested for murder.

Plus, there’s still the JaSam stalker issue that has to be resolved. General Hospital spoilers reveal that it’s an old enemy of Jason’s back from the dead. Will this be one of the enemies the gang encounters on their big Cassadine Island adventure?

All of this kicks off in Greece during the week of July 4. What do you think GH fans? Are you excited to see the four Port Charles peeps involved in an unlikely adventure on foreign soil?