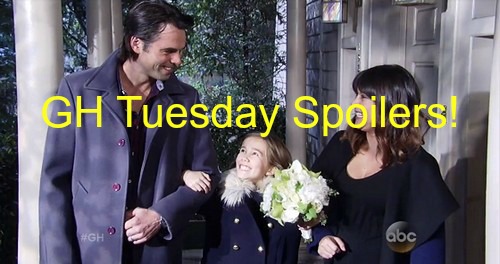 “General Hospital” (GH) spoilers for the Tuesday, January 5 show are all about revenge and retribution. Anna Devane (Finola Hughes) is out for blood and so is Lulu Spencer (Emme Rylan). Robin Scorpio (Kimberly McCullough) will also have a showdown at GH. Here’s what you need to know…

First, Anna steps up the hunt for Carlos Rivera (Jeffrey Vincent Parise). She’ll grill preggers Sabrina Santiago (Teresa Castillo) but may have pushed too hard on the single mum. Sabrina will go into labor today and Felix DuBois (Marc Samuel) will head over to GH with her.

Anna isn’t done there, though. She also confronts Julian Jerome (William deVry). Anna thinks Alexis Davis (Nancy Lee Grahn) is a fool for hooking up with the murderous mobster and shares her opinion and sarcastic congratulations on their recent engagement.

Anna wants to let Julian know that she’s going to make him pay for having Duke Lavery (Ian Buchanan) shot. Too bad DA Paul Hornsby (Richard Burgi) has no interest in prosecuting Julian and reassures the reformed mobster that he’s off the hook.

Paul also has a sit-down with Jordan Ashford (Vinessa Antoine) and questions Anna’s aggressive tactics for dealing with people she suspects. Looks like Paul is trying to discredit Anna with the PCPD because he suspects she might be on to him.

Patrick Drake (Jason Thompson) and Robin need to plan their wedding, but work comes first. Patrick has an appointment with Sonny Corinthos (Maurice Benard) about that twitchy leg of his. Michael Quartermaine (Chad Duell) tags along for the doctor visit at GH.

Patrick is cautiously optimistic about the wiggling leg – and the visit puts Michael in the right place when Sabrina is brought in – she’s in distress and the labor may be problematic. Will Michael reveal Sabrina’s paternity lies to his dad? Will Michael go check on Sabrina in labor or walk out?

Sabrina is ready to take drastic action to get Michael back with her and to be her baby daddy. Plus, will we see Carlos lurking around GH? He was keeping close tabs on Sabrina and that is his baby… Robin is also at GH – she goes to see about getting her old job back from Dr Obrecht (Kathleen Gati).

Obrecht will act high-handed, but Robin has the goods on the devious Fraulein who held her captive, tormented her mom and stabbed her dad. Robin wins the confrontation, but will working with Obrecht change her mind about wanting her job back and start her thinking her family deserves a fresh start?

Liz Webber (Rebecca Herbst) gets a scare when she goes to wake Jason Morgan (Billy Miller) from a nightmare – he’s sleeping on her couch at little Jake Spencer’s (James Nigbor) request. Jason wakes up in the throes of a violent action and grabs Liz way too hard. This scares them both.

Speaking of possible violence, Johnny Zacchara (Brandon Barash) kicks his revenge plan against Valerie Spencer (Brytni Sarpi) into high gear. Where can we expect to see those photos that made it look like she was taking a bribe? And why would anyone bribe a PCPD academy cadet?

Looks like whatever Kristina Corinthos (Lexi Ainsworth) is hiding is serious. She’s ready to move out of her mom’s house before the poop hits the fan. She tells Sam Morgan (Kelly Monaco) who will want to know what’s going on with her little sister.

All this and more on the Tuesday, January 5 GH. Watch then come back to CDL for more “General Hospital” spoilers and news.