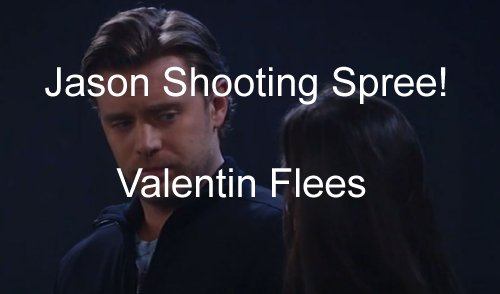 General Hospital (GH) spoilers tease that Jason Morgan (Billy Miller) has had enough of sitting on the sidelines while Valentin Cassadine (James Stuart) wreaks havoc on people that Jason cares about. Jason and Sam Morgan (Kelly Monaco) conspire to shake things up.

Sam creates a distraction and Jason goes for the guard’s gun. Next thing the bad guys know, Jason is downstairs and a hail of bullets is flying all over. Too bad Valentin didn’t Google Jason’s name before he tucked him away in an upstairs bedroom.

Valentin’s gut told him that Jason was a problem, but he had no idea that Jason cold flip Valentin’s hostage situation on its ear and take control of the unfolding events. Valentin just shot Kevin Collins (Jon Lindström) and now everything is erupting into chaos.

Laura Spencer (Genie Francis) is livid that Valentin shot her son Nikolas Cassadine (Nick Stabile/Tyler Christopher) and now he’s shot the new guy in her life that she was really starting to like. Valentin may be in over his head with this situation despite the small army at his disposal.

So when Jason comes downstairs armed and with Sam safely out of the way, all hell will break loose. Valentin has already lost Nik over the balcony incident and Lulu Spencer (Emme Rylan) is running loose in the tunnels. Events in the main room are spiraling out of control.

This is the perfect environment for Jason to make a move. General Hospital spoilers show that Jason will use his mad mob enforcer skills to deal with the clear and present threat of Valentin and his men. Jason comes in gun blazing and takes out Valentin’s men one by one.

Valentin may have to concede and escape rather than sticking around to battle it out with Jason. Better to live another day and deal with Jason later when he can better control the situation. After all, Valentin has the signature that he wanted from Nikolas to take all the Cassadine properties.

Plus, Nikolas is out of the way now that everyone presumes that he died. Valentin got what he came for – the Cassadine inheritance – so he can leave with his remaining henchmen, regroup and live to fight another day.

After the gun battle, Laura fights to save Kevin’s life, Lulu tries to find her way out of the tunnels when she finds a body and then gets lost, and the group makes plans to head out onto the grounds of Cassadine Island since they’ll be sitting ducks in the house.

Very soon, General Hospital spoilers tease that Jason and Sam will uncover a shocking fight that shakes them to the core. What do you think GH fans? Will it be Jason that takes out Valentin? Will the terrifying Cassadine black sheep make alternate plans to take out the others after Jason flips the script?