General Hospital (GH) Spoilers: Jason’s Memories of Love for Sam Flood Back – JaSam Back on in Steamy Romance 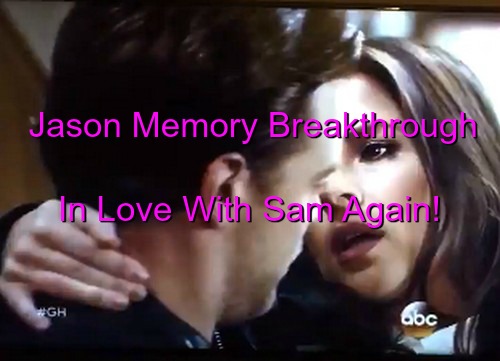 “General Hospital” (GH) spoilers reveal that Jason Morgan (Billy Miller) will soon recover a significant memory that will change everything for Sam Morgan (Kelly Monaco) and could wipe out any residual feelings he has for Liz Webber (Rebecca Herbst).

Lately, when Jason has recovered memories, it has been much more dramatic. Before, he was only getting images here and there of his past life. But the more recent memories he’s recovered have been tethered to emotions and that’s been major progress for Jason.

But the memory he recovers next will make all the past ones pale in comparison. Jason will remember a romantic night dancing on a balcony in the rain with Sam – at the height of their passion. This memory will hit Jason hard – all the love for Sam will come flooding back.

Jason was taking his time to get to know Sam slowly and was moving a bit beyond the friend zone, but this will take things to a whole new level. GH spoilers indicate he will have all that emotion flood back in – and, best of all, he happens to be with Sam when it happens.

This is the spark that restarts JaSam. Very soon we could see them locked in a heated kiss and rekindling all that passion – and love – which means lovelorn Liz will be left out in the cold as Jason rediscovers his feelings for his true love Sam.

Of course, it’s unlikely that TPTB at GH will let this moment turn into a happily ever after for JaSam without any hiccups. GH spoilers indicate that Jason will recover all of his memories in coming months – and that means he’ll get back the bad memories of Sam too.

If you recall, Jason once threatened to kill Sam (and he meant it) when she sent thugs to scare Liz and her kids. That will come back at some point – as will his feelings for Liz. Jason has a complicated history with these two women – and a lot of love for both.

What we may see in coming weeks is a reprisal of JaSam and Jason convinced that this is what his new life is meant to be. But when he recovers memories of Sam’s betrayals and his affection for Liz, Jason may yet yoyo back and forth between the two women for a bit.

What makes this hard is that Sam will be all-in as soon as Jason reaches for her – and if more memories of their troubled past cause him to draw away, it will hit Sam hard. But for now, with Sam and Danny living in the penthouse they shared, we may soon see Jason making his home with them again.

This will crush Liz (and Liason fans) but it was inevitable that Jason would get memories back of his love with Sam. He may have known Liz longer – but he’s been in a relationship longer (albeit in stops and starts) with Sam. Plus, Liz has seen the writing on the wall for a while and was just waiting on this.

What do you think GH fans? Are you excited to see Jason finally recover his love for Sam and see JaSam reigniting their love again? Share your comments below and come back to CDL often for more “General Hospital” spoilers and news.

Jason's memories are returning. Will they ignite a spark with Sam? #GH