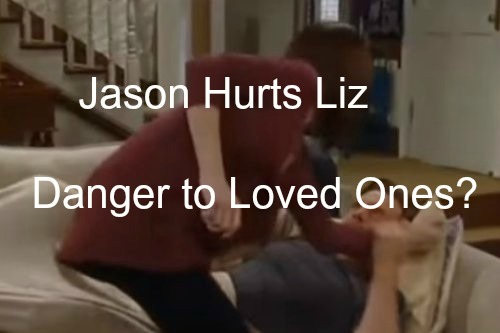 “General Hospital” (GH) spoilers reveal that the tendency towards violence that Jason Morgan (Billy Miller) possesses will soon hit close to home. Jason will physically hurt Liz Webber (Rebecca Herbst) in coming days and will scare them both.

After little Jake Spencer’s (James Nigbor) insistence that he saw a man at the window, Jason agreed to spend the night at Liz’s house. Of course, there’s a question of whether Jake really saw anything or not. Jason will doze off on the sofa and that’s where things start to go bad.

Jason has a nightmare – whether it’s of his time under Helena Cassadine’s (Constance Towers) control or another frightening episode in what has been a life lived violently is not certain. But he makes noise and wakes Liz.

Liz comes downstairs and sees Jason in the throes of a night terror. Liz will try and wake him to end the nightmare and that’s when he snaps. In his sleep, Jason lashes out and grabs Liz hard, hurting her arm. Jason terrifies her because she can’t get loose from his iron grip.

Then Jason wakes and he’s terrified because he sees that he’s hurting her. For weeks, we’ve seen Jason tormented by his capacity for homicide and violence. Jason sees that when things get tough, he goes into a scary auto-pilot mode where people end up dead.

It was bad enough when he was hurting mobsters but now he’s hurting regular people. The event with Nikolas Cassadine (Tyler Christopher) really shook Jason because even though Nik started the fight, who throws someone off a balcony?

The answer is someone who is dangerous at the core. And now with this event with Liz, Jason wonders if he can ever be a normal person. He sees that his sleeping sub-conscious mind went to violence. Jason will begin to think that he’s a threat to those he cares about – including Liz.

What’s interesting is that in his past life as a mobster, Jason tried to stay away from Liz because he felt his mob ties endangered her. In this new life, Jason will see that he’s the one who is a threat to Liz – and others – because of his violent nature.

Because Liz is hurt but immediately forgives him, it will soften his attitude towards her even more. But Jason will become increasingly convinced that he can’t be trusted around other people. He will move out of the MetroCourt and into a place of his own.

No doubt Carly Corinthos (Laura Wright) wants him to stay there and either Liz or Sam Morgan (Kelly Monaco) would welcome him to be with them – as would the Quartermaines. But Jason will likely choose a place where he can be totally alone so he can’t hurt anyone.

He is feeling unstable and uncertain of himself – and worried he’s going to keep hurting people. Jason is right to be concerned. He already had a baseline level of lethal even before Helena got hold of him. The microchip is out of his head, but she might have done other things to him (and his son Jake).

What do you think GH fans? Is Jason a danger to those he loves, even though he doesn’t mean to be? Should he put a buffer between himself and his family to make sure he doesn’t hurt them? Or was this night terror situation with Liz just a one-off and he’s fine?

Share your thoughts in the comments section below and check back often with CDL for tons of “General Hospital” spoilers, news and updates.