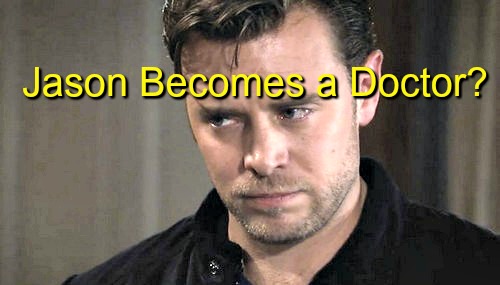 “General Hospital” (GH) spoilers tease that Jason Morgan (Billy Miller) will continue to move further away from his Stone Cold and mob past in upcoming episodes next week. Jason feels the burden of the lives he’s taken since he came back from the dead – will he now look for a meaningful way to atone?

If you remember your Quartermaine history, you know that Jason was pursuing a medical degree when AJ Quartermaine drove drunk and Jason tried to stop him. The end result was a tragic car crash that trashed Jason’s brain and turned him into a Stone Cold killer.

But now that another car accident has flipped his brain back the other way, General Hospital spoilers ask if Jason will pick up where he left off all those years ago? Will Jason go back to medical school and learn to save lives as a way to make up for all those he took?

Jason’s memories are returning gradually and GH spoilers indicate that soon he will have all his lost memories intact. Once that happens, we can expect Jason’s guilt to mount because he’ll realize the extent of the blood on his hands.

Jason has taken countless lives over the years as Stone Cold  – no matter that many of the deaths were justified or in self-defense. Jason hates the idea that he’s killed and when he finds out how much he’s killed, he will want to get some of the red out of his ledger.

GH writers and showrunners have stated that the show will continue to focus on medical storylines, but the mob will also play a role. Allowing Jason to finish his medical studies would be a perfect way to move him from mob to medical.

And since history can always be nudged and fudged, the writers could make it so that Jason only needs to pass his medical board exams rather than go back to school. But who wouldn’t mind seeing Jason at college as the world’s sexiest (and most dangerous) co-ed.

GH spoilers have hinted that Jason would continue to move further away from mob life and closer to the Quartermaines. The other big option for Jason is to take on a role at ELQ – but with Nikolas Cassadine (Tyler Christopher) at the helm, that could be a challenge.

It would be nice to see Jason in a suit making power plays at ELQ channeling his grandfather Edward. But Jason in a lab coat at GH channeling his father Alan would be even more appealing. Can you imagine Jason as a pediatrician? He loves kids…

No matter what’s ahead for Jason, it will be fun to watch – and fingers crossed he stays far from the mob. What do you think GH fans? Will Jason be in scrubs or a business suit? Which path would you like to see him pursue – healer or tycoon?

Share your comments below and come back to CDL for more “General Hospital” spoiler and news.