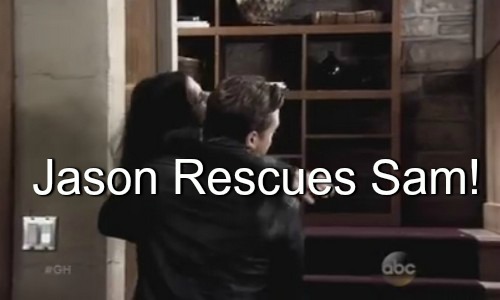 “General Hospital” (GH) spoilers reveal that Jake Spencer (James Nigbor) may not be quite the ruthless killer fans thought. After Sam Morgan (Kelly Monaco) falls down the stairs, he thinks she’s dead and will stash her away in panic. But later, he confesses and it’s just in time for his dad to save her.

GH spoilers indicate that February sweeps will be fiery in Port Charles – and that could be quite literal at Liz Webber’s (Rebecca Herbst) house as a deadly fire breaks out. Sam will be trapped in the basement, likely stashed where her voice will be muffled since Jake thought he was hiding a body, not a live person.

Remember, Sam confronted the kid and he ran and she gave chase. She should never have done that. Jake wanted to call Jason Morgan (Billy Miller) and that’s what Sam should have done. So while Jake is responsible for the incidents at the house, Sam put herself in this position.

However, that doesn’t stop Jake from feeling terrible or blaming himself. When his parents get home, they’ll sit down to have a talk with him about his disturbing artwork and antics at the house, but they will notice that Jake seems more and more distracted.

Not only is he guilting out over Sam, but he’s also having some sort of crisis based on his history on Cassadine Island. Meanwhile, Sam comes to and when she realizes no one can hear her, so she tries to get out and sets off a gas leak.

Gas will fill the house and make the place primed to go up like a torch. When Jason and Liz finally notice the smell, Jake will confess that Sam is dead in the basement. Look for the Webber house to go up in flames. Jason will get Liz and Jake to safety first.

Then he goes back into the burning house to rescue Sam. Jake and Liz will be terrified for him, but Jason knows he can’t leave her, Stone Cold just doesn’t come in any other flavor – even if Jake told them he thinks she’s dead. GH spoilers indicate that Jason should walk out of the inferno holding an injured Sam in his arms.

They will escape the big blast but we may see Liz’s house flattened completely. GH spoilers also reveal that Liz and her kids will soon take up residence at Wyndemere and the only reason Liz would do that is if her house is no longer livable.

Sam will survive the fire, but she’s inhaled a lot of gas and has to be taken to GH where it looks like she’ll languish in a coma or unconscious with a worried Jason at her side. Jason will save Sam’s life once again – as he has so many times before.

The fire at Liz’s house could really spark a hot romance between Jason and Sam that will rekindle their love. (Fire puns intended) For Sam to wake up with a loving Jason at her side will make it worth the near-death scare she’s endured.

And it looks like any chance Liz had with Jason will be in ashes – just like her house. What do you think GH fans? Are you excited to see Jason in a brave rescue of Sam from the burning house? Are you thrilled to see JaSam together again?

Share your comments below and check back with CDL often for other hot “General Hospital” spoilers and news.